For this week’s Xbox Exclusives Spotlight, we’re moving away from the action and adventure elements of our Song of Iron Spotlight, and taking a look at Ludomotion’s roguelite RPG, Unexplored 2: The Wayfarer’s Legacy. We’ve rounded up everything we know here, together with help from game director Joris Dormans, so put the kettle on, sit back, and have a read through our Unexplored 2 Xbox Exclusives Spotlight.

What is Unexplored 2: The Wayfarer’s Legacy?

Unexplored 2: The Wayfarer’s Legacy is an action-RPG with roguelite elements, and is the sequel to developer Ludomotion’s Unexplored. In Unexplored 2, instead of forging further underground, you’re heading out into a wide world full of secrets and dangers, and with the game’s legacy system, you’ll see the consequences of your actions and choices impacting your environment.

When does Unexplored 2: The Wayfarer’s Legacy launch?

Unexplored 2: The Wayfarer’s Legacy is set to launch this year. We don’t yet have a specific release date, but we’ll update here when we do. 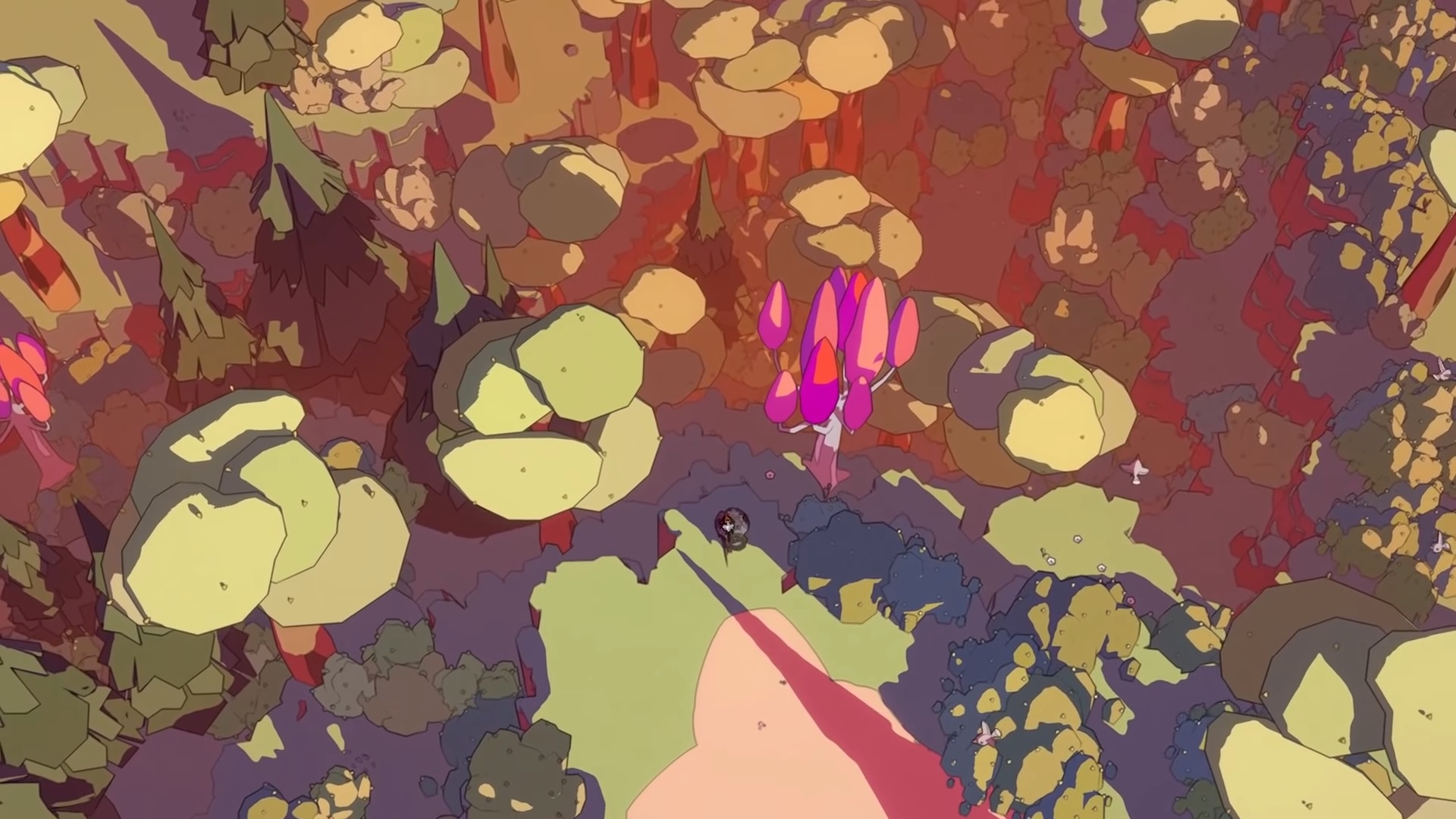 Your mission in Unexplored 2 is to destroy the Staff of Yendor. Your main antagonist is the Empire, which is slowly expanding its grip on the land. “That creates a lot of pressure,” Dormans explains. “Whatever you do, the world does not have unlimited runs. Eventually the Empire will have conquered all and the world will be lost.” You’ve got that one clear goal in mind; to traverse the worlds of Unexplored 2 and destroy the staff, but the game, between you and your goal, seems to be “pretty open,” as Dormans says. “The mission is pretty straightforward, but it is up to you to find a way to actually do it. There are many opportunities to do things in the world,” Dormans continues. “You might say the world of Unexplored is more of a simulation deep down, but we set it up and filled it with pieces that easily combine into stories. Individual player trajectories and humanity’s natural tendency to connect the dots make sure interesting and unique adventures emerge.”

How does Unexplored 2: The Wayfarer’s Legacy play?

Unexplored 2’s legacy system is a fundamental part of the game. In Unexplored 2, if you die, you’ll then come back as a new character several years after your first character’s death. Autosaving and quickloading won’t help you here — your first little character will be gone for good. This means you’ll have a unique sort of foresight in exploration, as you can see your past mistakes, or else remember which areas you might want to return to, and which you might want to avoid. Exploration and combat are essential to the gameplay, while strategy and tactics will also play an important part — for instance, in decisions such as whether or not you have enough supplies to brave the desert. 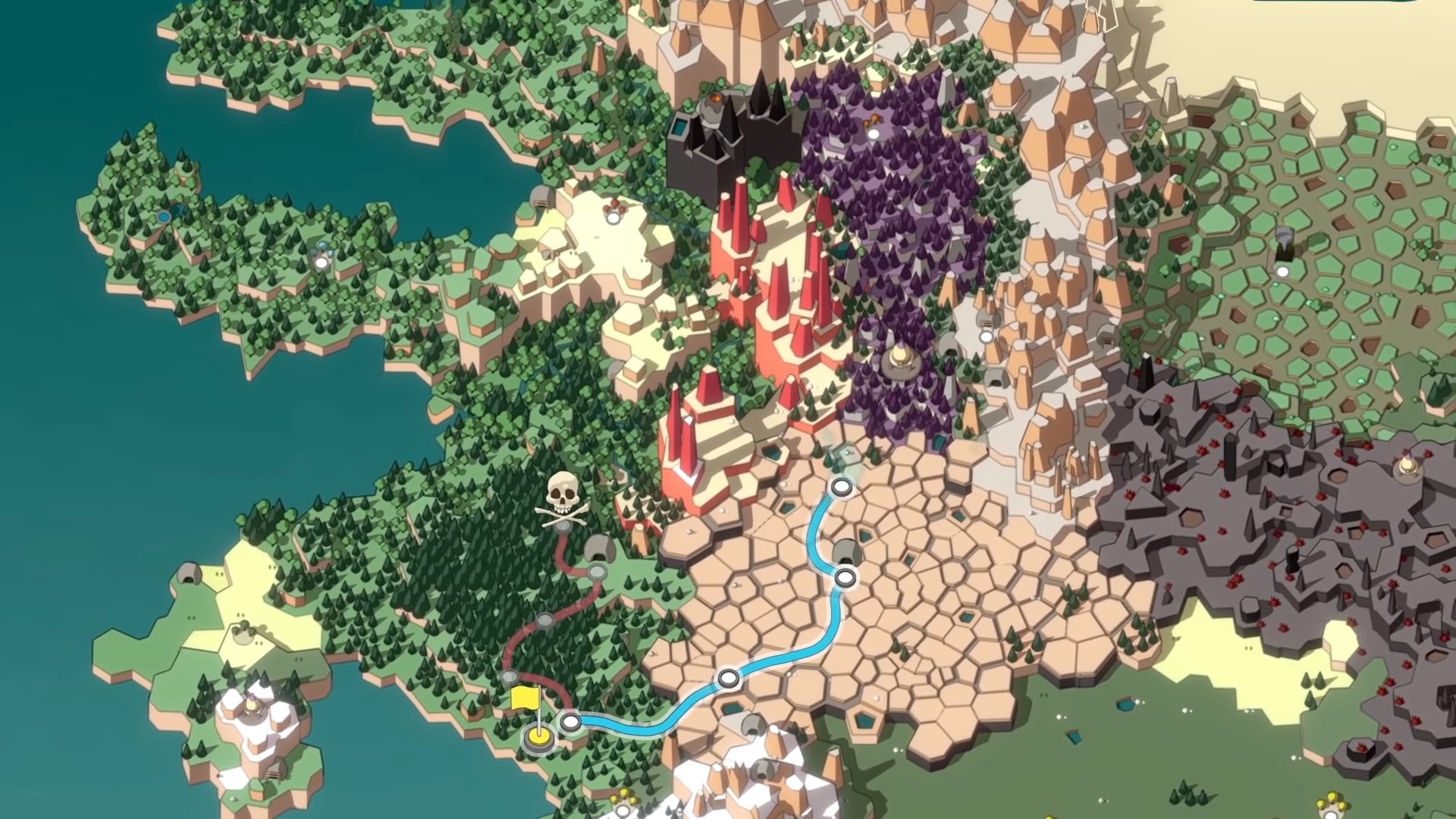 According to Dormans, diplomacy will also be key. “In the world there are several free clans that you could ally with. Doing so will unlock that clan as a playable background in the next run and make them resist the advance of the Empire, buying you more time in the long run to complete the main objective, which is to destroy the staff,” Dormans explains. “This might require you to complete another mission for that clan, and it might even bring you into conflict with other clans. But most importantly you will need to decide and plan what to do on a single run. Is it figuring out important clues, gathering a necessary magic artifact, counteracting the advance of the Empire, or allying human-like clans or elemental beings? All might make viable targets to set for yourself.”

The freedom to create your own adventure is also key to the experience of Unexplored 2. In fact, that’s what Dormans is most looking forward to having players experience — the freedom of experiencing your own adventure. “The thrill of adventure where you are not executing plans dictated to you by quest-givers, but adventures for which you were on the ‘Counsel of Elrond’ yourself, so to speak,” Dormans elaborates. “Setting the stakes and objectives yourself is a type of freedom I feel we do not see enough of in adventure games.” 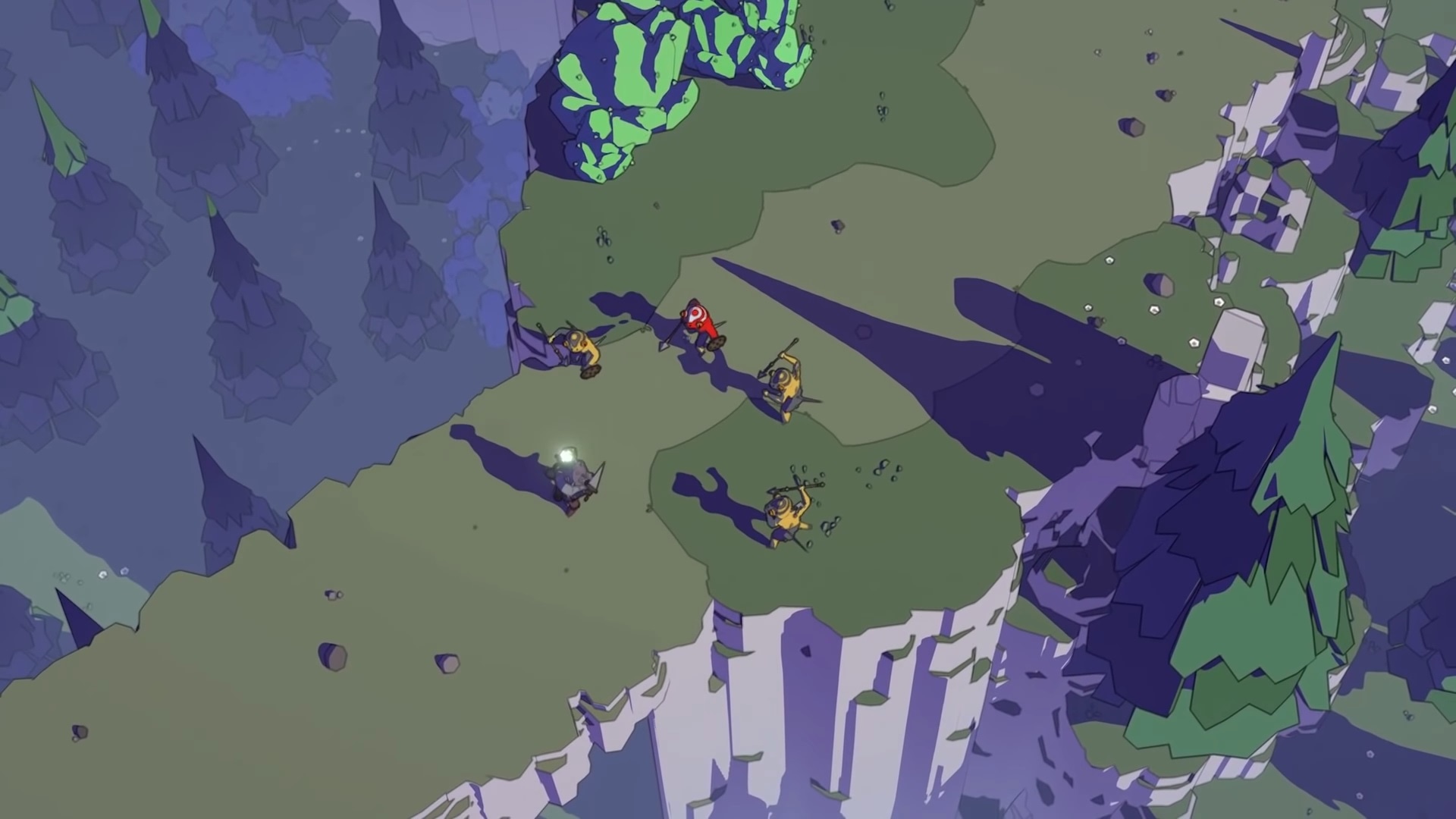 What’s the Unexplored 2: The Wayfarer’s Legacy game world like?

Instead of Unexplored’s Dungeon of Doom, Unexplored 2 takes you up and out into a world of forests, mountains, plains, and valleys. When you die in Unexplored 2, you’ll return as a different character to a world littered with the consequences of the past actions and mistakes of your previous character. If you die in the final mission, the world will end with you, and the only way to keep playing will be to start up in a new world. For this reason, the devs emphasise that you’ll want to make sure you’ve fully explored your world, and uncovered all of its secrets.

What’s more, the more you die and return to the world as a different character, the harder that world will be. The Empire will continue to advance, putting more and more pressure on you to complete your quest and destroy the staff “before the world is lost. But there are also other encounters that evolve depending how you choose to deal with it,” Dormans says. “For example, you might steal a treasure from a dragon in one run, only to find out in the next run that it antagonized the dragon, and now it is taking out its anger on the world.” In this way, your own previous actions will play into how you experience the world each time you return to it.

“The way we generate our world and levels allows the game a lot of forward planning. Once we set up the world, we have a pretty good idea of what magic tools might be found where. In fact, we use that system to make sure at least one or two solutions to the final challenge exist,” says Dormans. “Because we know all these at an early stage, we can do a lot of foreshadowing. The game knows what you might expect to encounter when traveling through a particular region of the map, and it informs the player so they can plan and prepare accordingly. This level of sophistication creates a lot of cohesion, which is something some generative games struggle with.” 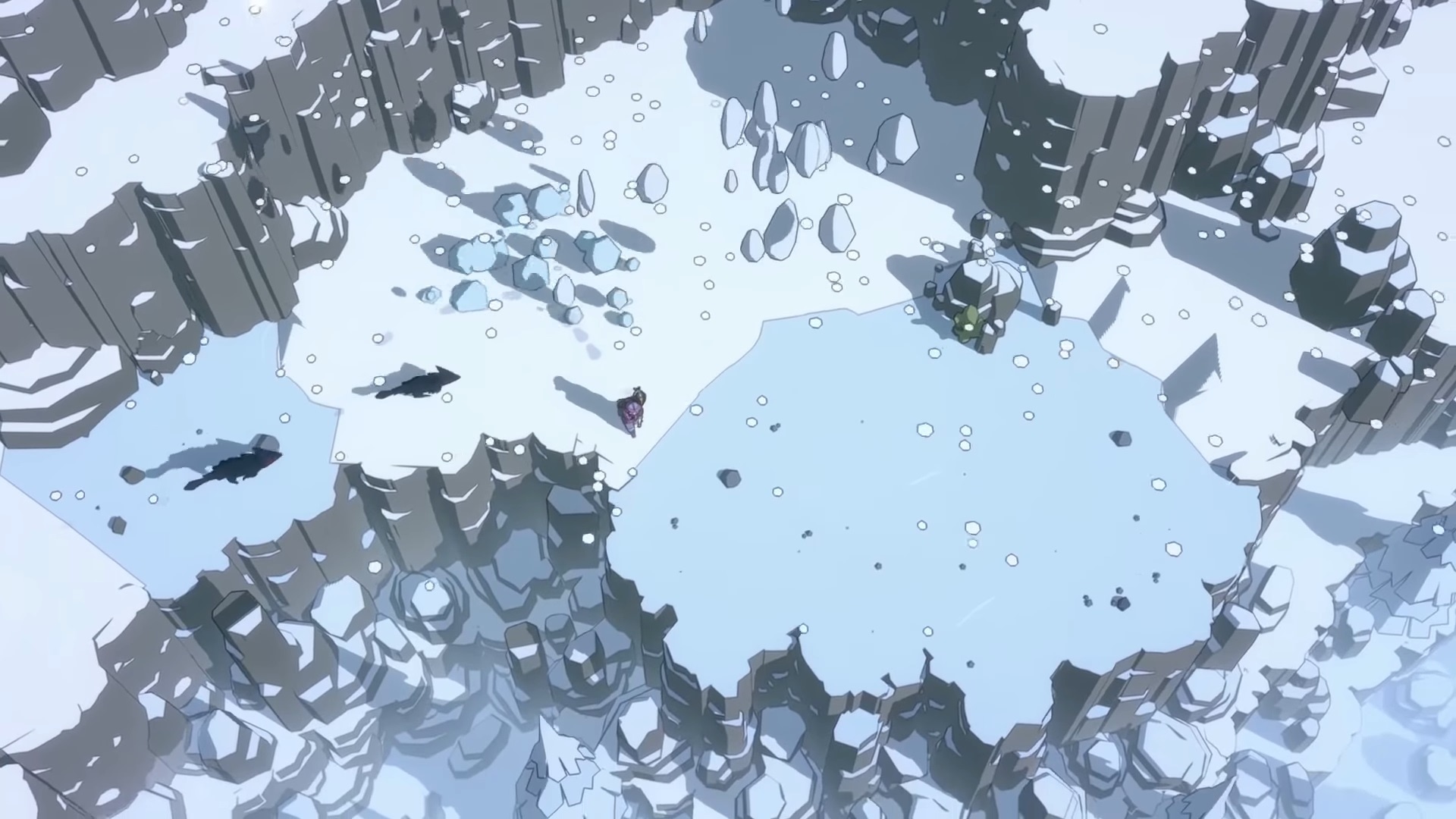 Any news on Unexplored 2: The Wayfarer’s Legacy achievements?

“We haven’t set those up yet, but inside the game we have a system of deeds,” Dormans says. “They replace normal RPG progression based on XP. When you perform a task you typically get a deed, but you can also collect deeds from challenges that appear because the circumstances are right.” Simple deeds will be for hunting for prey, for example, or lock-picking. “We always felt that ultimately those deeds will hook up to the more traditional achievements,” Dormans explains. “In Unexplored 1 we used achievements to unlock persistent upgrades. In Unexplored 2 we will probably have something similar, and those upgrades will need to be persistent across worlds.”

Given the high level of replayability offered by Unexplored 2’s legacy system, and the range of worlds and actions available, we also wondered whether achievement hunters might face multiple playthroughs. “Replayability is already high in Early Access, and if we get to add all the content we want, it will keep you entertained for many, many hours,” Dormans replies. “If achievements are connected to very specific pieces of content they might be hard to find. So we should make sure the opportunities to get them are either frequent enough, or that there is a system where you can ask the world to be generated in a way that it contains particular content on request.” We’ll be sure to update you when we learn more about the achievements for Unexplored 2. 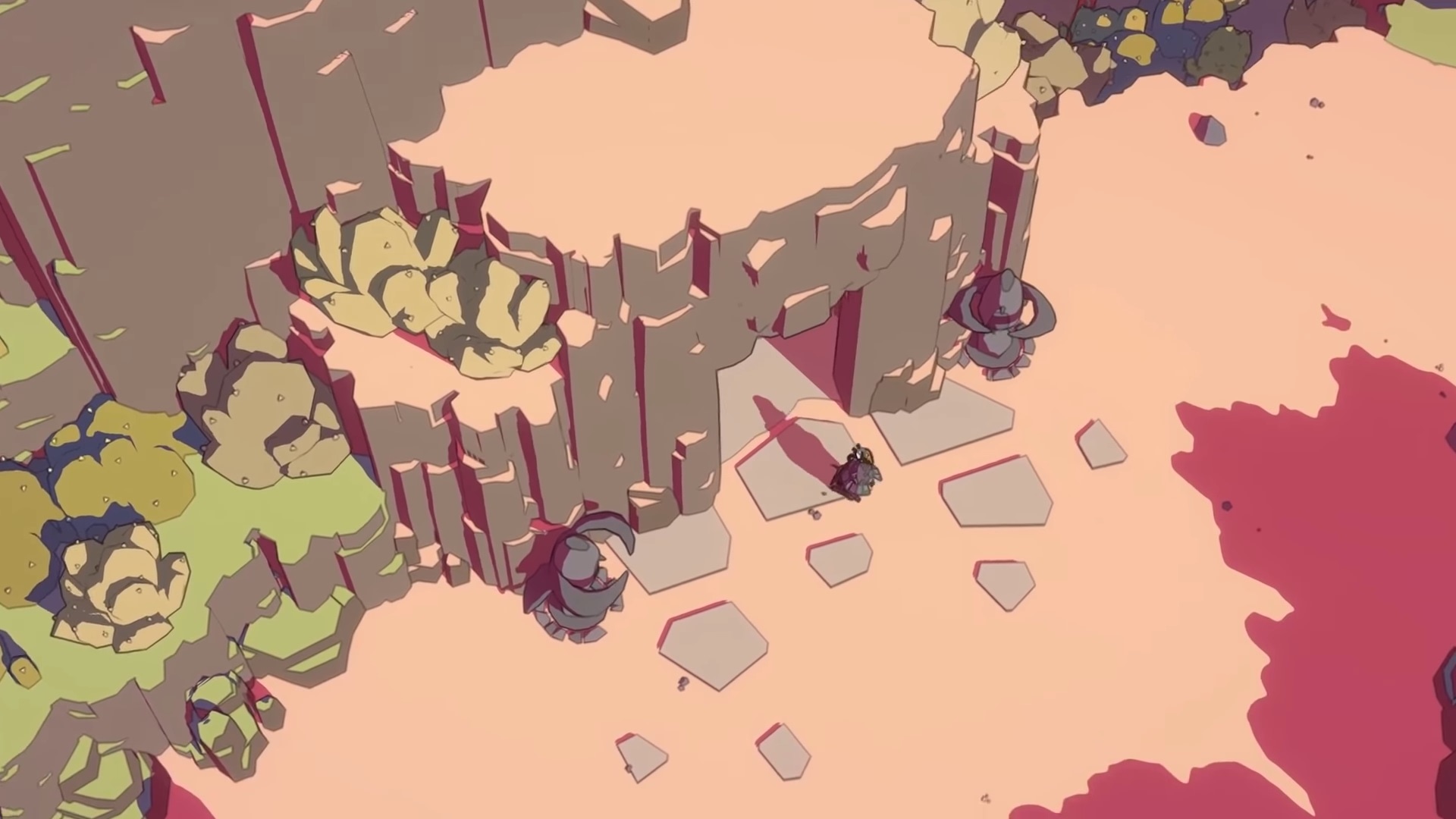 In our complete guide to Xbox Exclusives for 2021, we suggested that Unexplored 2: Wayfarer’s Legacy might be a great fit for fans of Bad North, Rogue Legacy, and Unexplored — the first for its similarly eye-catching art style, the second for its use of a similar mechanic to Unexplored’s legacy system, and the third because, well, you know. What do you think? Will you be keeping an eye on Unexplored 2? Let us know in the comments!

vivo Y73 with triple camera teased ahead of launch

Spiritfarer's last and largest update arrives as a free download next week on December 13th, adding a new island,...

EA has announced that Grid Legends will launch on February 25th and that preorders are now live for both...