The OriginOS Ocean user interface by vivo was introduced yesterday. The company had a big event for its home crowd, since the UI is still available only in China, overseas phones ship with HarmonyOS. The new version, which is 2.0 in terms of development, promises overhauled design, including more information available at glance.

The manufacturer has posted a list of all phones that will get the new OriginOS in the future, and it includes a staggering amount of 47 different models. There are phones from all price ranges and lineups, including the vivo NEX 3S which is almost two years old. 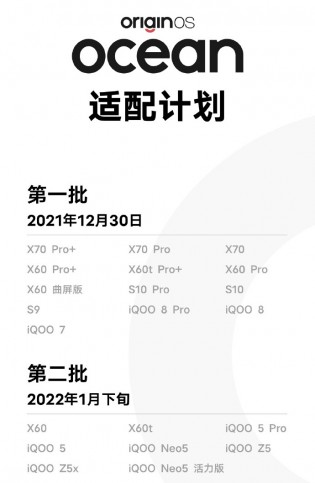 It is worth noting the rollout will happen in four batches. The first will be starting in a couple of weeks, with the X70 and X60 series lined up for the beta, as well as the latest iQOOs and S series.

All the phones will get a feature, roughly translated as “Child Guardian”, which will link the device to a parent’s device, and the grown-up can see how the phone is positioned, and therefore can relate what is the child’s posture. There are also functions like seeing how long the device is being used, which app is being used and can turn on vision protection.

In terms of safety and security, OriginOS Ocean will stop keeping passwords, biometric data and other records on cloud platforms unless specifically required by the user.

Source (in Chinese) | Via

Video: The Lord Of The Rings: Gollum Game Gets A Brand New Cinematic Trailer

Xiaomi 12 Pro has been on the market for the past six months, and today the company reintroduced the device...

Video: The Lord Of The Rings: Gollum Game Gets A Brand New Cinematic Trailer