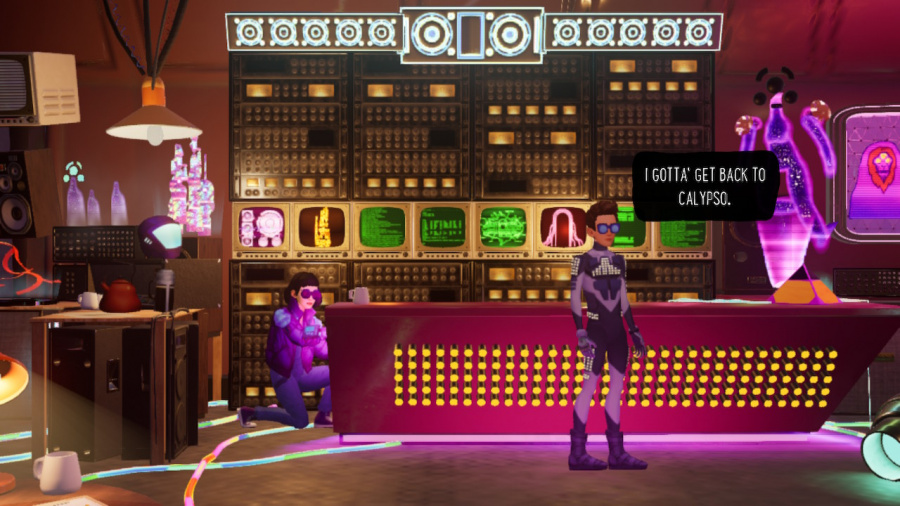 The Artful Escape hit Windows and Xbox in 2021, published by Annapurna Interactive. Over Annapurna’s brief 5-year history, its preferred flavour of stylish, quirky, thoughtful games has become well-understood, as has the “triple-I” production and publicity push that sets Indie Devs™ apart from other independent developers. Coming from Beethoven & Dinosaur, The Artful Escape’s finding-yourself story and guitar-wailing platform gameplay conceit won some lofty praise last year, but can they still impress on Switch in 2022?

The answer’s an easy ‘yes’, but after so much hype, the surprise feels a little fainter and the simplicity of the musical mechanic more transparent. There’s also the expected Switch port caveats to address, as well, about how the console copes with a game that’s made for bigger systems. Nonetheless, the positives far outweigh some minor gripes and those who’ve come to trust Annapurna’s judgment will find they’ve backed another winner.

The setting is an atemporal-feeling Colorado town. It could be 1970, or it could be hipster 2018, where literally everyone wears cool glasses and people can be selective about which eclectic indie bookshop they frequent. At the opening of the game, as a local festival approaches in honour of his folk-music-legend uncle, our guitarist hero Francis is due to churn out some of his forebear’s hits for the crowd. This is the quotidian railroad whence he needs artfully to escape. It’s not a nastily oppressive existence, just cramping his self-expression. 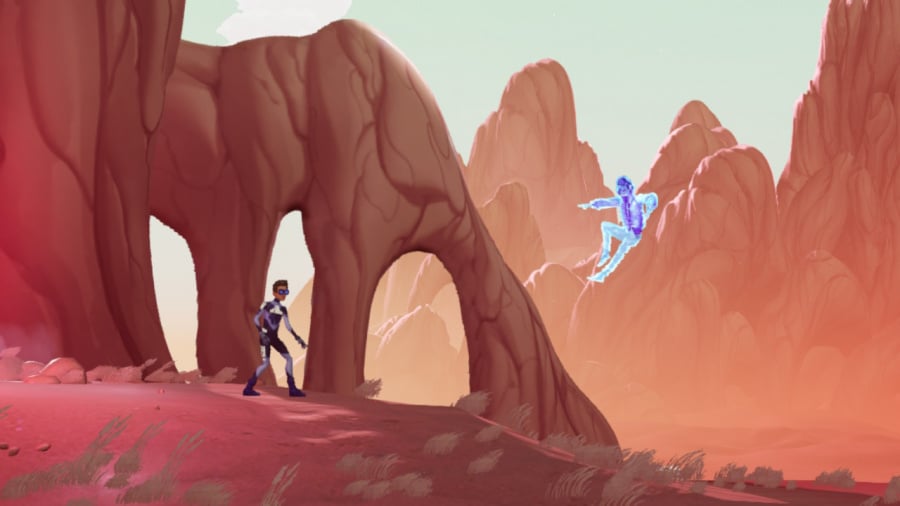 The town itself has a whimsical, too-perfect feel and is presented with the geometrical precision of a Wes Anderson film. It’s a great style, and tees up the story perfectly. Francis’ life isn’t hell: there are gorgeous mountain vistas and friendly local businesses, and he’s sort-of headlining a folk festival. But there’s the teenage sense that this can’t be all there is. It’s hard to say what’s wrong with the situation, but it feels like there must be something more. And a strange visitation reveals there is indeed.

The world Francis escapes to is mindblowingly imaginative. The colours, shapes and juxtapositions of trippy creatures and space-rocket sci-fi seem to be larger even than the screen, Francis shrinking ant-size among it all, then blowing up to fill the field himself when he delivers his lines. The audiovisual setting is dynamic, inventive and ever-changing.

However, this gluttonous feast for the eyes and ears leaves the thumbs pestering for scraps like an ignored dog. The format is 2D platformer, but there’s a lot of watching the scenery go by, interspersed with conversations to read. To be fair to Beethoven & Dinosaur, we got a clue that this was how it was going to be in the earliest moments of the game. Your first instruction is, “To strum a folk ballad about the toils of a miner’s life, hold Y.” That seemed like a funny, if ancient-meme, “Press F to pay respects” joke. But it wasn’t a joke. You may have seen the thrilling clips online of rad guitar riffs propelling a cosmic megastar through neon solar systems. In those clips, the player is probably just holding ‘Y’. There’s another giveaway line from the first minutes of the game: “It’s a sight, make no mistake.” It’s an apt summary: hold ‘Y’; it’s a sight. 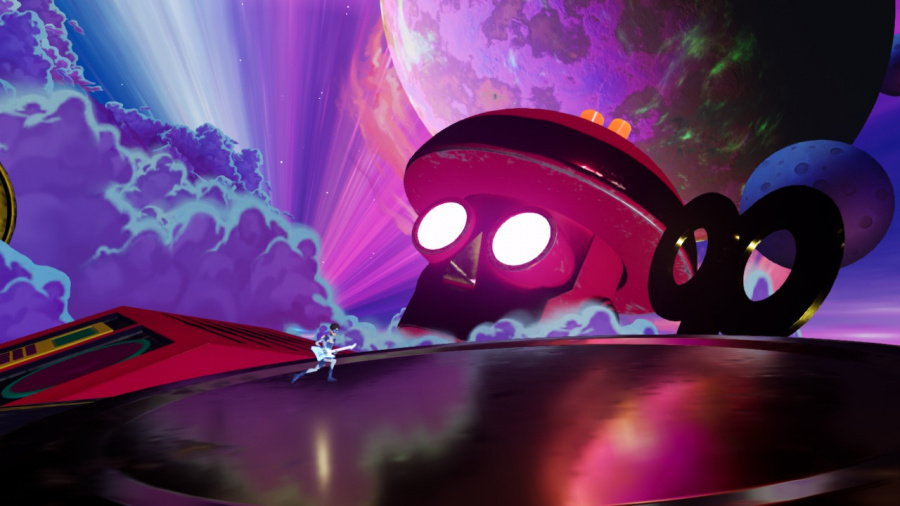 So, here, a mere button-press scatters a collage of pink cloudscapes, misty canyons, alien fungus bioluminescence and groovy space station gangways. With uncontrolled colours, scale, movement and sounds, that button-press throws out emphatic, ecstatic rock chords with the sublime poses struck that they deserve. But it’s still just a button-press.

Sometimes, there’s a little more to it. The best button-pressing moments let you riff freestyle with five buttons. These last about a minute. It’s good they leave you wanting more, but the game just feels mean for not providing it. Without getting spoilery, we felt there was a particular chance missed, story-wise, for the player to have carte blanche on the wailing. After so much patient abstinence, we felt we’d earned a moment to rock our hearts out, but it wasn’t forthcoming.

Behind how that all feels, there are some robust, if simple, mechanics. The platforming is basic. You’re not clearing skill tests, it’s about loving the jump-feel: jump, double-jump, “Hold Y to Shred”, press ‘A’ to knee-slide like an adrenaline-drunk stadium soloist, then, if you like, press ‘X’ to wallop your guitar butt-first into the ground and make the whole soundscape sort of stumble, as if muttering, “Who’s this plonker?” 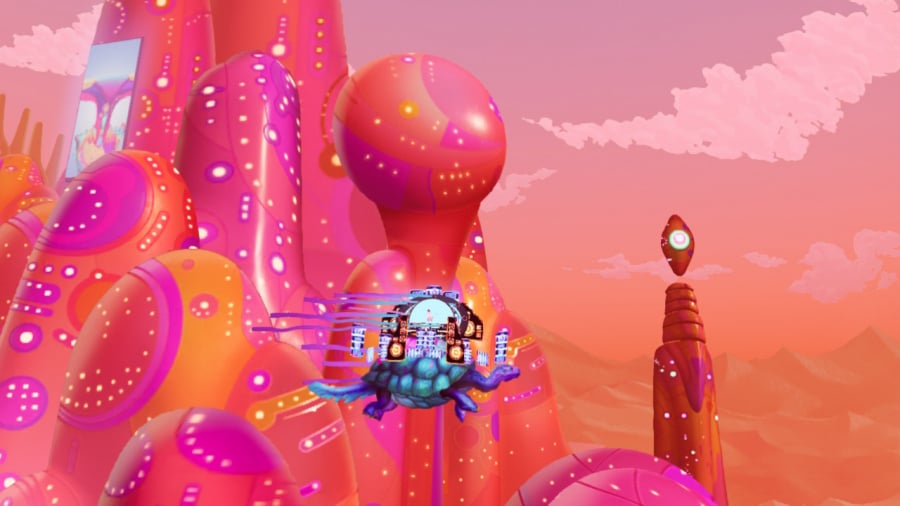 The platforming links sections of mild exploration, where you will button-push through the conversations that makes the story. Woven into your dialogue options are choices about who your character is. Much better than building a character at the start of a game — when you don’t know what they could be — here you build as you go, shaping Francis into someone else and providing the self for him to find on his space-age walkabout. The story is a cut above. Rather than a dense series of plot points, there’s a very focused short passage of Francis’s life which we get to feel our way through, with an uplifting take-away after the game’s few hours.

No aspect of The Artful Escape overstays its welcome. Those freestyle jams understay it to a fault. It doesn’t take itself too seriously, with its incessant whimsy, but it does commit to what it’s doing without a too-hip-for-that irony. As a story of a teen looking for and finding a new way to see what life has to offer, it is a success.

Performance-wise, the Switch does OK. Things are sometimes murkier than we’d like – especially Francis, who gets blurry at small sizes – and there is some (rare) jarring pop-in as textures shift resolution. Shadow effects at the start of the game flicker unpleasantly – it would have been better to remove them. Fortunately, that first environment is not used for too long and the rest of the game hides the Switch’s limitations better. There are some dropped frames when things get exciting, but not enough to detract from the beauty of it all – the soundscape keeps on flowing perfectly anyway. These are the familiar Switch trade-offs, then, to be considered in the calculus of what other platforms you have access to and how much you want to play it on the toilet. 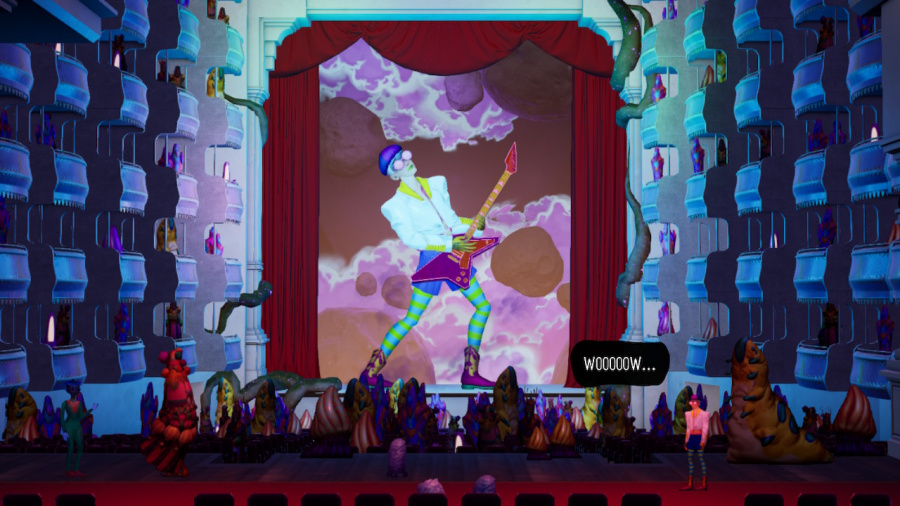 Just in the lifetime of the Switch, what passes for an entry-level flashy-graphics indie platformer has really moved up a few notches. We’ve had Inside, Planet Alpha and Hoa, just to name a few sensory superstars we’ve reviewed well. It’s a credit to Beethoven & Dinosaur that their game’s presentation stands comfortably on the top tier, and a credit to the Switch that it’s still just about keeping up.