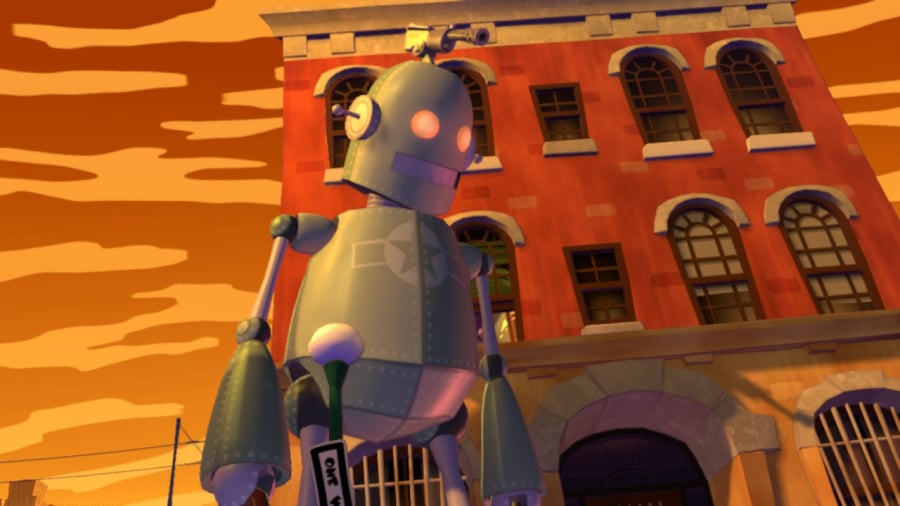 It’s back now with improved visuals, re-recorded music and dialogue, and all your favourite baffling moon logic puzzles that require the use of thinking so divorced from rationality that it’s really the acquired taste of acquired tastes. A lot of people aren’t going to get it, and it’s pretty difficult to fault them for that. It’s an issue more or less endemic to the point-and-click adventure genre, with surprisingly few exceptions. We think it’s fair to say that it’s the personality and humour that draws people to these games – and Sam & Max certainly has plenty of personality. As for the humour? That can be a little harder to swallow.

An experience consisting of five distinct episodes, Beyond Time and Space is rather gorgeous from the off – the aforementioned visual upgrade really makes the game sing, especially – forgive us for stating the obvious – on the OLED Switch, where the cartoony colours pop. Performance is pretty good, too – the framerate seems to be unlocked, but we only very rarely saw 60fps; thankfully, most of the time it’s above 30fps and even the busiest scenes didn’t seem to dip much further. It’s not the kind of game that demands the slickest performance, anyway.

It’s an adventure game of the old school, the LucasArts era, of combining your inventory with every clickable hotspot until you find the next solution. Or, you know, actually figuring it out using your mind, we suppose. Unfortunately the game is esoteric from the off and requires an enormous, exhausting amount of backtracking. This could be worse, as Sam (player character and chipper doggy detective) controls rather brilliantly – the game supports full touchscreen input as well as direct control using the analogue stick, so you can enjoy the game old-school style or mix and match with a more contemporary approach at your leisure. Still, while getting around is fairly effortless, that doesn’t make up for the somewhat archaic design, interspersed with shockingly weak (but thankfully easy) minigames.

If you do find yourself stuck, though, the game will offer you hints, but in our experience these weren’t necessarily that useful. Thankfully walkthroughs exist in case you find yourself frustrated, because as we mentioned you’re likely here for the characters and bizarre storyline rather than the quite rote adventure game stuff. Said story, though, is difficult to review; it’s strange and surreal, a little “random” by today’s standards, and not entirely to this reviewer’s personal taste. That is to say it’s not particularly funny, a little try-hard, and a few too many accents in lieu of punchlines for us. Others will, naturally, disagree, but we thought the old ’90s Sam and Max TV cartoon was very funny indeed, so what happened?

It’s tricky to review games like this, especially re-releases where many will already know if they want it. The Telltale formula hadn’t been scaled back to “interactive cinema” yet, so you’re dealing with clunky puzzles and somewhat clunky delivery of clunky comedy, but you might love it. In a sense, each to their own. As a port it’s difficult to fault, but as a game it’s really no great shakes. But then again, if you dig that lagomorph, it doesn’t need to be.