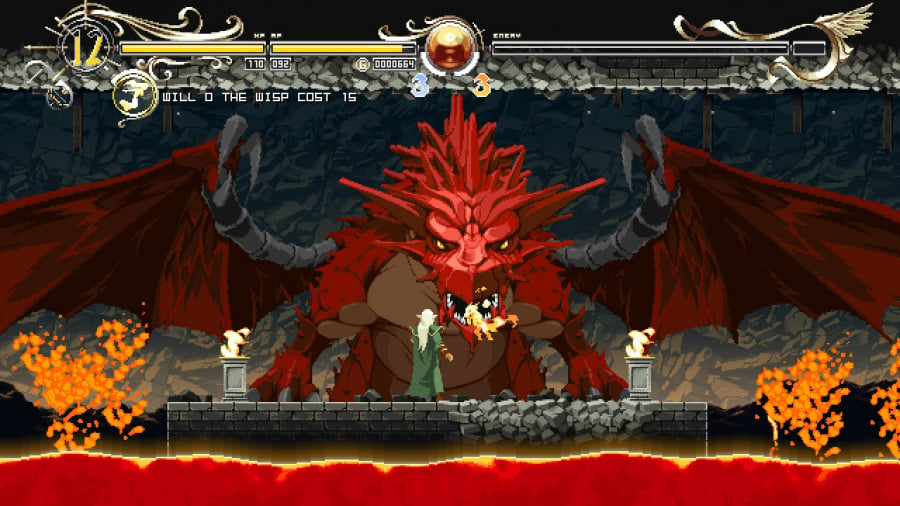 Team Ladybug has something of a reputation of turning famous licensed properties into compelling Metroidvanias. After the opening PC-exclusive freebie Shin Megami Tensei: Synchronicity Prologue starring series mascot Jack Frost came Touhou Luna Nights, another ‘exploration action’ title featuring the endlessly popular Gensokyo gang. The team’s follow-up to that is the lovely-looking Record of Lodoss War: Deedlit in Wonder Labyrinth. Based on the novels/anime/manga/audio dramas/games of the same name. Helpfully for a game based on something that was mildly popular in the West 30 years ago, prior knowledge of titular heroine Deedlit’s high fantasy adventures isn’t required to enjoy the story here, with her generally learning things alongside the player and everything else either revealed with time or easily summed up as ‘someone/thing she used to know’.

More immediately recognisable than Deedlit’s past acquaintances are Wonder Labyrinth’s gaming influences. The spectacularly animated and cloaked 2D protagonist — sword in hand, double-jumping over gaps and smacking suspicious walls until they crumble — makes the game feel more Castlevania: Symphony of the Night than some of that trendsetting game’s own sequels. Unlike many other pretenders to Alucard’s crown, Team Ladybug’s latest effort is happy to see Konami’s classic as a springboard for its own ideas rather than something to be slavishly copied, and so for every expected feature (enemies dropping equippable weapons, warp rooms, and so on) there’ll be a major new mechanic to balance it out. 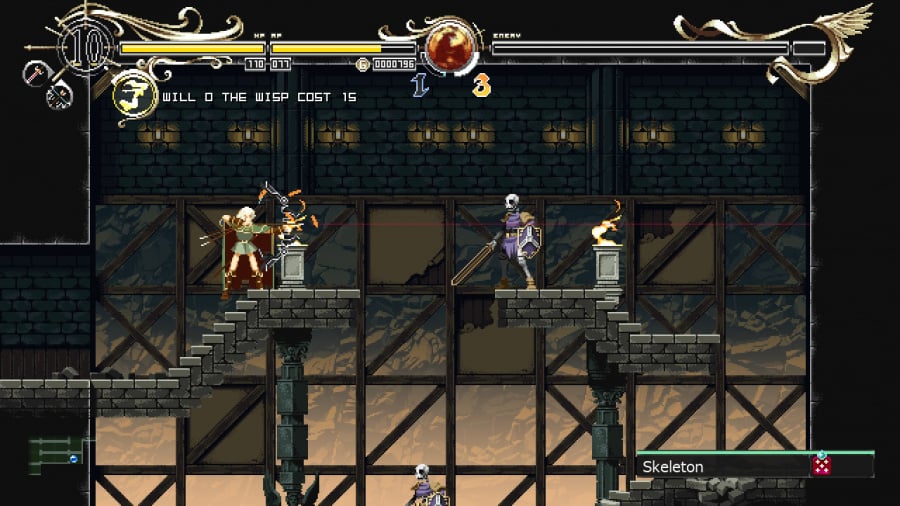 The biggest of these is the spirit system, which can only be described as ‘Ikaruga-like’. Early on, Deedlit is permanently joined by a wind slyph and a fire salamander and from then on can switch between the two with a quick dab of the ‘R’ button. As with Treasure’s puzzle-shmup, matching Deedlit’s elemental alignment to an attack or her environment negates that damage, enabling her to walk casually through lava or stand straight in front of a fire dragon’s open maw. Rapidly switching back and forth between fire and wind is often required to survive in boss battles, especially as landing blows build up the opposite elements’ power levels and at maximum these rapidly refill our blonde-haired high elf’s health bar.

Key to this concept’s success is that it helps, but is generally not required. Getting hit hurts — sometimes a lot — but it’s never an automatic death sentence, not even when you’re knocked back onto spikes or bounced between a menagerie of mythical beasts. Likewise using the ‘wrong’ element to attack an enemy is generally the difference between doing 150 and 200 damage per hit, not 15 and 200.

The interconnected areas in which you encounter everything from mimic chests to attack dogs summoned from blood have been crafted with the sort of care that makes such a difficult design task look effortless: always encouraging exploration without ever making the map feel too big and directionless; always subtly directing you where you need to be without railroading you from one point to the next. A whole host of clever ideas are regularly introduced to keep the experience feeling fresh, ranging from shadowy clouds (with ominous red eyes that only reveal their true form when you turn away) to wooden mannequins (that reform almost as quickly as you can kill them) and a whole host of arrow-based puzzles, which ask you to take aim at a distant cog or deftly ricochet your projectile through a small gap. 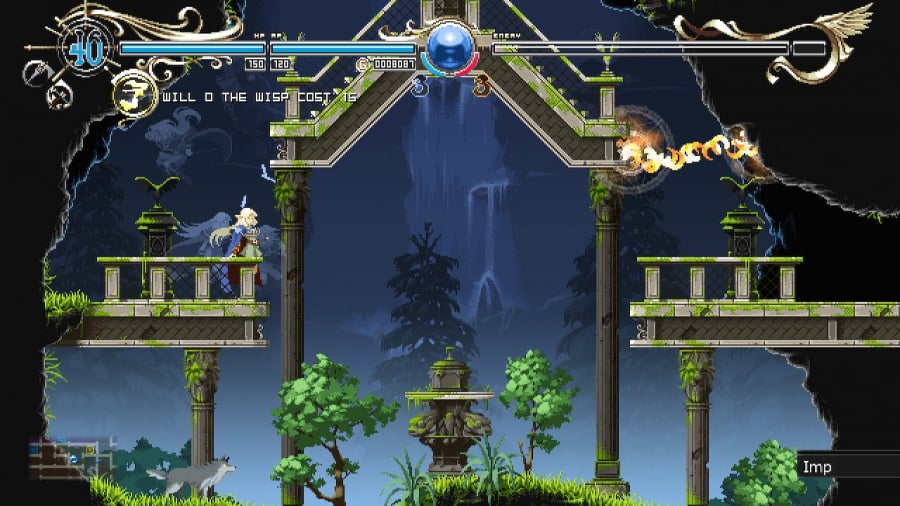 These short challenges are always pitched so you feel a sense of achievement for pulling them off, but are never so exacting that standing one pixel too far to the left or firing at a slightly off angle ruins a shot. Crucially your bow can be also used in combat and is even essential for defeating enemies with a long reach, preventing the weapon and these puzzles from feeling like a tacked-on novelty.

Wonder Labyrinth manages to put up a fight from beginning to the very end, meaning even after you’ve felled multiple screen-filling dragons and are walking around with enough weapons to set up a shop of your own, those who fail to take the monsters in their way seriously will soon find themselves back at the previous save statue. Luckily these are placed close enough to reduce backtracking (and always close to the clearly telegraphed boss rooms), but far enough away to encourage careful, skilled, play.

Completing the game unlocks a boss rush mode as well as customisable challenge settings should you start a fresh run. This can include setting out with every spell and weapon at your fingertips (regardless of whether you found them yourself last time), staying at level 1 for the entire game, staying at 1HP for the entire game, or any combination of the above. If you want a nigh-impossible challenge, then Wonder Labyrinth’s got it; if you just want to tinker with some fancy blades, then you’ve earned the right to do that, too. 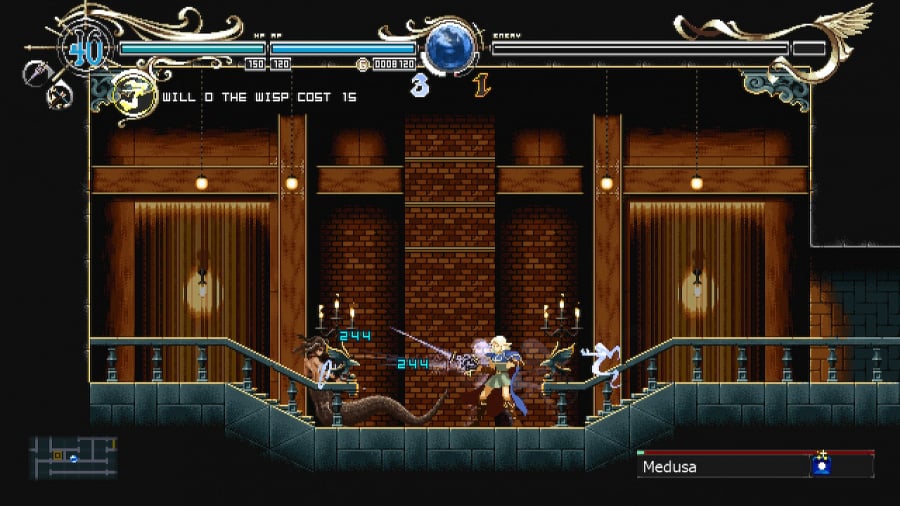 There are however a few issues we need to mention. During our time with the game we experienced some inconsistent ‘hitching’, the game briefly stuttering for no discernible reason. Rare patches of slowdown also reared their head at unexpected moments, too. We weren’t able to consistently recreate either problem, and nothing we did — or avoided doing — seemed to make it disappear, either. The English translation tends to err towards ‘passable’ at best and the stage names are left in Japanese, which while not depriving anyone of vital information is a little bit of intended flavour text completely lost on international audiences.

As far as in-game balance is concerned, we never found any real need to use any spell other than the conveniently low-cost ‘Will o the wisp’ — the first one you receive. We’re all for early abilities retaining some utility throughout a game, but an easily spammable multi-hit spell that automatically homes in on targets, ignores all terrain, and is capable of causing a significant amount of damage from a safe distance, even on the final boss? Unless the enemy’s completely resistant to magic, there’s no good reason not to use it as often as possible, its universal helpfulness discouraging experimentation with special weapon effects and other spell types. For a game that otherwise displays such thoughtful and intentional design, this feels like an odd oversight.

Record of Lodoss War: Deedlit in Wonder Labyrinth doesn’t take too long to beat — even the most curious/thorough/careful player is unlikely to go over the 10-hour mark — but when the adventure’s this much fun and as densely packed with creativity, does it matter? At the end of it all you’re far more likely to feel satisfied than short-changed, and Deedlit’s tale is a surprisingly touching one regardless of how much or little you already know about Lodoss. If you’re after something with the flavour of Symphony of the Night that doesn’t feel like a shallow knock-off, this is a fine alternative.