Rainbow Six Extraction is a spin-off of Ubisoft’s flagship competitive multiplayer hit, Rainbow Six Siege, set in an alien-infested depiction of the United States. This three-player cooperative shooter borrows its predecessor’s roster of operators and weapons and recontextualizes them inside a more approachable player-versus-environment setting – often to fun results. The operator advancements offer exciting rewards for players willing to invest the time, though the climb to unlock the best rewards is steep. Additionally, a persistent health system creates meaningful consequences for players who fail to best Extraction’s many challenges by carrying over operators’ injuries from match to match. However, Rainbow Six Siege casts a substantial shadow, and despite its best efforts, Ubisoft’s latest shooter struggles to fully emerge from beneath it.

Extraction is technically well-crafted. It’s polished and enjoyable. Though, I don’t find it nearly as compelling as the shooter it spins off from. Even during the most exciting scenarios, I couldn’t help but wish I was playing Rainbow Six Siege. Each incursion in Extraction begins like a match in Siege. Your team picks their operators and equipment load-outs and then prepares to fight an onslaught of AI enemies across four brand new locations: New York City, San Francisco, Alaska, or Truth And Consequences — which is a real town in New Mexico. These maps are divided into multiple sub-maps that offer ample cover and verticality, though none of them are particularly memorable outside of a few exceptions. More interesting locations, like a UFO-themed diorama or an abandoned casino, are covered in parasite nests and dark slime textures, making them difficult to memorize. 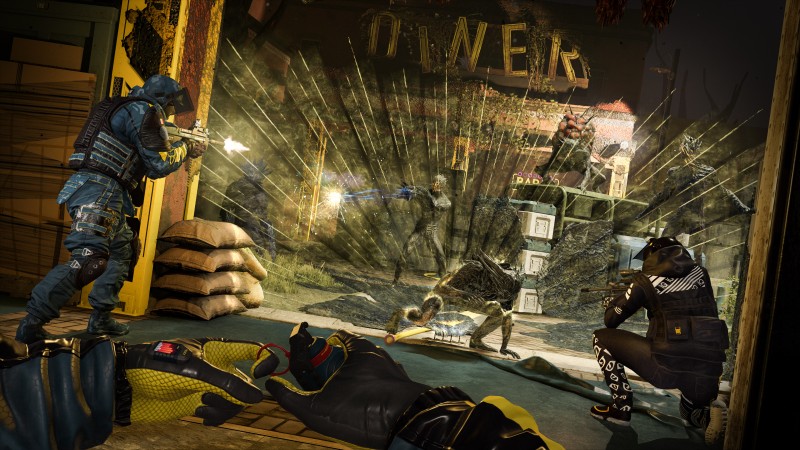 You and your crew complete a random selection of goals in each area. These range from stealth-based challenges like Biopsy, which requires you to obtain alien tissue samples with a knife, to attack-oriented objectives like Hunt and Decontamination, which serve as standard-fare kill quests that remain somewhat satisfying. Siege fans may recognize missions like Sabotage and Rescue, which mirror the Bomb and Hostage modes featured in Siege. My favorite objective type is Specimen, which requires your team to lure one of the powerful Archaeans – the parasitic antagonists tormenting the darkened hallways of every environment – into a trap to capture it alive. This objective is hilarious, and my teammates and I often laughed as one unlucky person had to serve as bait.

Airlocks separate each city’s three sub-maps, serving as safehouses filled with supplies like med-kits and (hopefully) ammunition. The deeper your squad ventures into the incursion, the harder it is to successfully extract as enemies increase in difficulty and variety, ranging from low-level grunts to terrifying behemoths capable of smashing through walls. I enjoy the variety, but you’ll have to increase the difficulty level to encounter the best ones. If you manage to fight your way through all three areas, you earn extra experience points, unlocking perks like increased movement speed or new abilities like Sledge’s charged hammer swing. These operator advancements are the highlight of Extraction’s progression loop, and I wanted to keep playing to obtain them. You also receive new operators, equipment, and cosmetics through advancing your player level by completing matches and level-specific challenges. While there are exciting rewards to unlock, and I appreciate the operator-specific upgrades, in particular, progression feels unnecessarily slow overall.

Every weapon handles differently, but I enjoyed using them all equally. Silenced rifles are my go-to weapon type. They trade raw stopping power for the ability to execute discrete kill-shots on all kinds of Archaeans. Shotguns reliably blow enemies – and walls – to pieces but attract lots of attention. Extraction also introduces stealth takedowns, offering a discrete method to complete your objectives when ammo and health are scarce. Nothing feels better than quietly clearing a perimeter with your team. However, the game fails to adequately convey when you’re at risk of being detected, so my attempts at subtlety often devolved into panicked shoot-outs.

While Extraction borrows a lot from Siege, it introduces a new feature I love: persistent operator health. Suppose you previously played as Vigil and exited the mission with only four health. In that case, he’ll start the next game injured unless you let him recover by completing incursions as other characters. Depending on your performance, several operators could have an injured status, or even worse, be missing in action until you rescue them during another mission. This system encouraged me to experiment with operators across the roster, resulting in white-knuckle encounters.

Rainbow Six Extraction converts much of Siege’s content library into an approachable co-op shooter, providing a tense environment for players of all skill levels. However, in a series of industry-defining hits, this installment feels incredibly safe and markedly less gripping than its predecessor.

We've emerged from the depths of the BioShock series to begin a fresh season of Video Gameography! We're doing things differently...

The revival and reinvention of Disney's Chip 'n Dale: Rescue Rangers hits Disney+ today with a new film that turns the chipmunk...