Overwatch 2 achievements are kicking people from the game

Overwatch 2 achievements are kicking people from the game


Overwatch 2 has had a bit of a rough launch, with DDoS attacks and long player queues, but a new problem has arisen: Overwatch 2 achievements are kicking players out of the game and server queue.

Overwatch 2 launched yesterday, and it quickly became apparent that quite a lot of players weren’t going to be able to get into the game. This was largely down to stability issues and two DDoS attacks, which caused substantial server queues, but as things started to settle and players were able to actually start playing the game, a new problem that involves the Overwatch 2 achievements has become apparent. 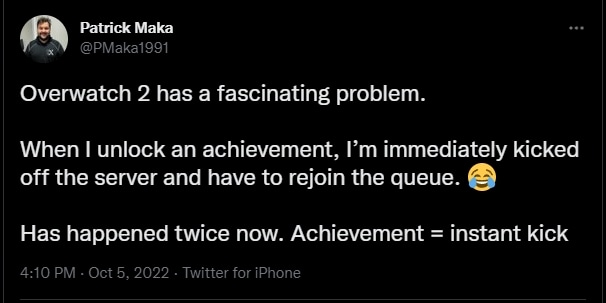 Some players are reporting a rather odd issue where earning achievements in Overwatch 2 boots them out of the game and server, forcing them to rejoin the server queue. We’ve seen reports of this issue in our forums, and on various social media sites, so it does seem to be impacting a fair few players.

We’re not sure what’s causing the issue, but it’s likely down to the server stability problems Overwatch 2 is facing. With any luck, this should all hopefully blow over soon. If you missed it, Overwatch 2 is using a revised version of the original game’s achievement list, and Blizzard added six new achievements to that list.

If you’re having trouble getting online with Overwatch 2 and want another free-to-play game to check out, give our best free Xbox games article a read.

Have you encountered this strange achievement issue in Overwatch 2? Let us know down in the comments!