That trailer led many to speculate that while Uncharted takes place before the Naughty Dog games, opting to go with a much younger Nathan Drake, the movie would be touching on each of the games in some way. For example, we see the iconic cargo-plane-over-a-desert sequence from Uncharted 3: Drake’s Deception in the trailer. We also see Chloe Frazer in the trailer, a character who doesn’t appear in the games until Uncharted 2: Among Thieves, and the main antagonist seems pulled right out of Uncharted: Drake’s Fortune.

If you were looking for a tie or connection to Uncharted 4: A Thief’s End, the newest poster released by Fandango today has you covered. 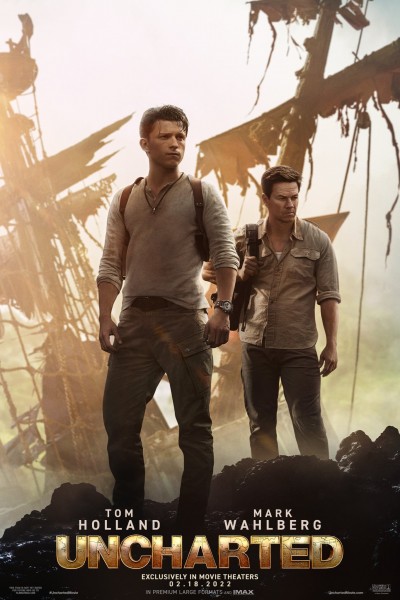 As you can see in the poster, it’s quite reminiscent of Uncharted 4, or rather, one of the final settings in it. Near the end of Uncharted 4, our cast is swinging from pirate ship to pirate ship in search of pirate gold and an escape from a ruined pirate city. Nathan Drake eventually makes his way to what is basically a pirate ship graveyard and it looks a lot like what’s seen in the background of this new poster.

As for how Uncharted will tackle this connection to Uncharted 4 – which mind you, is just speculation for now, but like, come on, look at it – alongside the nods to the other Uncharted games, we’ll have to wait and see when Uncharted is released in theaters on February 18. All that’s left now is to hint at The Lost Legacy and Golden Abyss.

While waiting for this movie to release, check out the first official trailer and then check out this look at Nolan North, the voice actor of Nathan Drake, on set with Holland.  Are you excited about Uncharted? Let us know in the comments below!

Tecno plans to launch the first Android with sensor shift IS, is working on a telescopic camera

We've emerged from the depths of the BioShock series to begin a fresh season of Video Gameography! We're doing things differently...

The revival and reinvention of Disney's Chip 'n Dale: Rescue Rangers hits Disney+ today with a new film that turns the chipmunk...

Tecno plans to launch the first Android with sensor shift IS, is working on a telescopic camera