The last feature is especially useful given non-breaking breakpoints can be left in production for days, weeks, and even months at a time while waiting to capture behavior that happens rarely and unpredictably.

How Do Non-Breaking Breakpoints Work?

If you’re familiar with general distributed tracing concepts, such as “traces” and “spans”, then you’re already broadly familiar with how non-breaking breakpoints work. Put simply, non-breaking breakpoints are small fragments of code added during runtime that, upon the proper conditions, save a portion of the application’s current state, and resume normal execution. In SkyWalking, this can be implemented by simply opening a new local span, adding some tags, and closing the local span.

While this process is relatively simple, the range of functionality that can be achieved through this technique is quite impressive. Save the current and global variables to create a non-breaking breakpoint; add the ability to format log messages to create just-in-time logging; add the ability to trigger metric telemetry to create real-time KPI monitoring. If you keep moving in this direction, you eventually enter the realm of live debugging/coding, and this is where Source++ comes in.

Source++ is an open-source live coding platform designed for production environments, powered by Apache SkyWalking. Using Source++, developers can add breakpoints, logs, metrics, and distributed tracing to live production software in real-time on-demand, right from their IDE or CLI. While capable of stand-alone deployment, the latest version of Source++ makes it easier than ever to integrate into existing Apache SkyWalking installations. This process can be completed in a few minutes and is easy to customize for your specific needs.

For a better idea of how Source++ works, take a look at the following diagram: 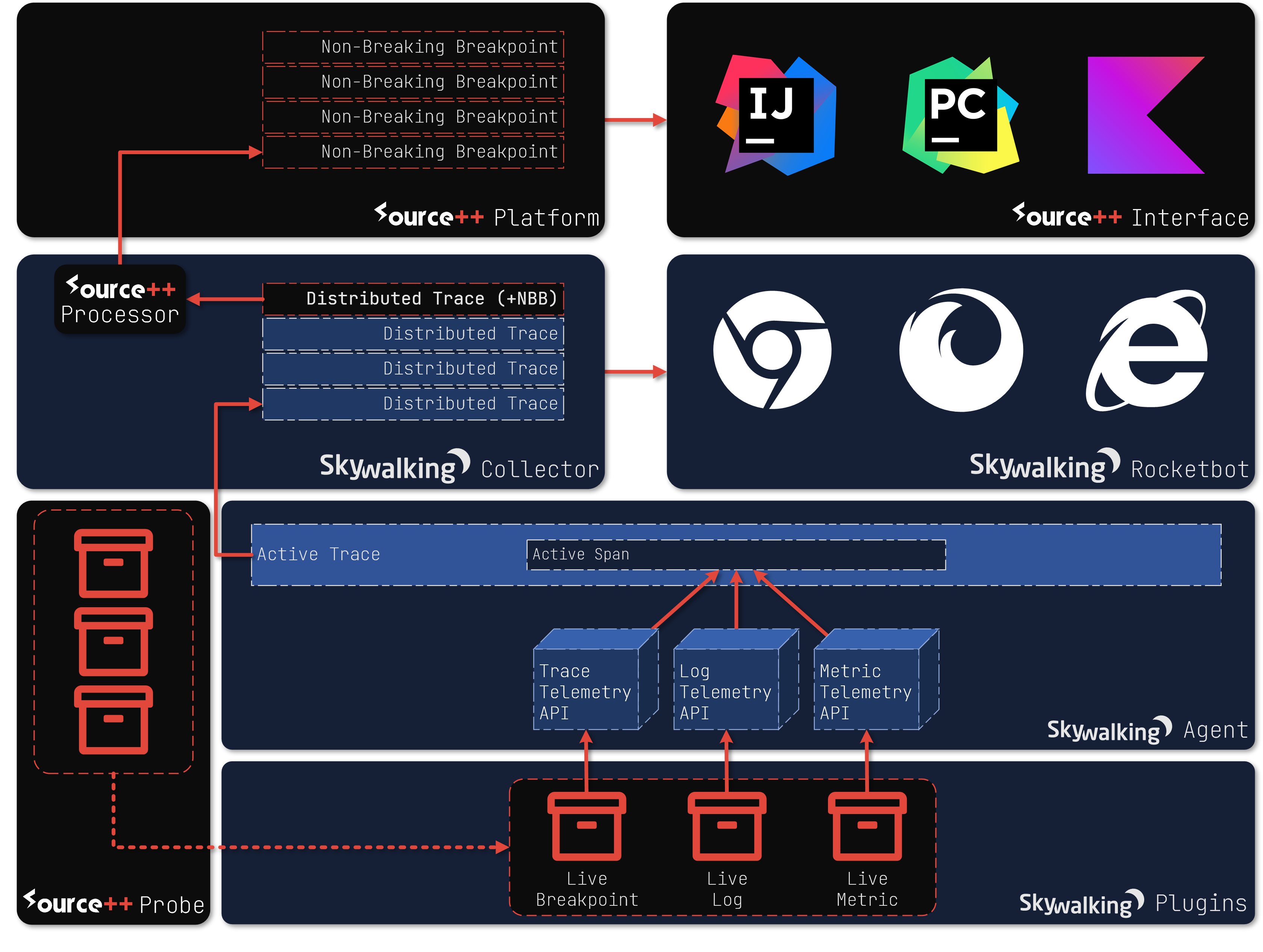 The Live Probe is currently available for JVM and Python applications. It runs alongside the SkyWalking agent and is responsible for dynamically adding and removing code fragments based on valid instrumentation requests from developers. These code fragments in turn make use of the SkyWalking agent’s internal APIs to facilitate production instrumentation.

One could easily view a non-breaking breakpoint ready for processing using Rocketbot, however, it will look like this:

Even though the above does not resemble what’s normally thought of as a breakpoint, the necessary information is there. With live processors added to your SkyWalking installation, this data is refined and may be viewed more traditionally via live interfaces.

Finally, with all the previous parts installed, we’re now at the component software developers will find the most useful. A Live Interface is what developers use to create, manage, and view non-breaking breakpoints, and so on. There are a few live interfaces available:

With the Live Instrument Processor enabled, and the JetBrains Plugin installed, non-breaking breakpoints appear as such: 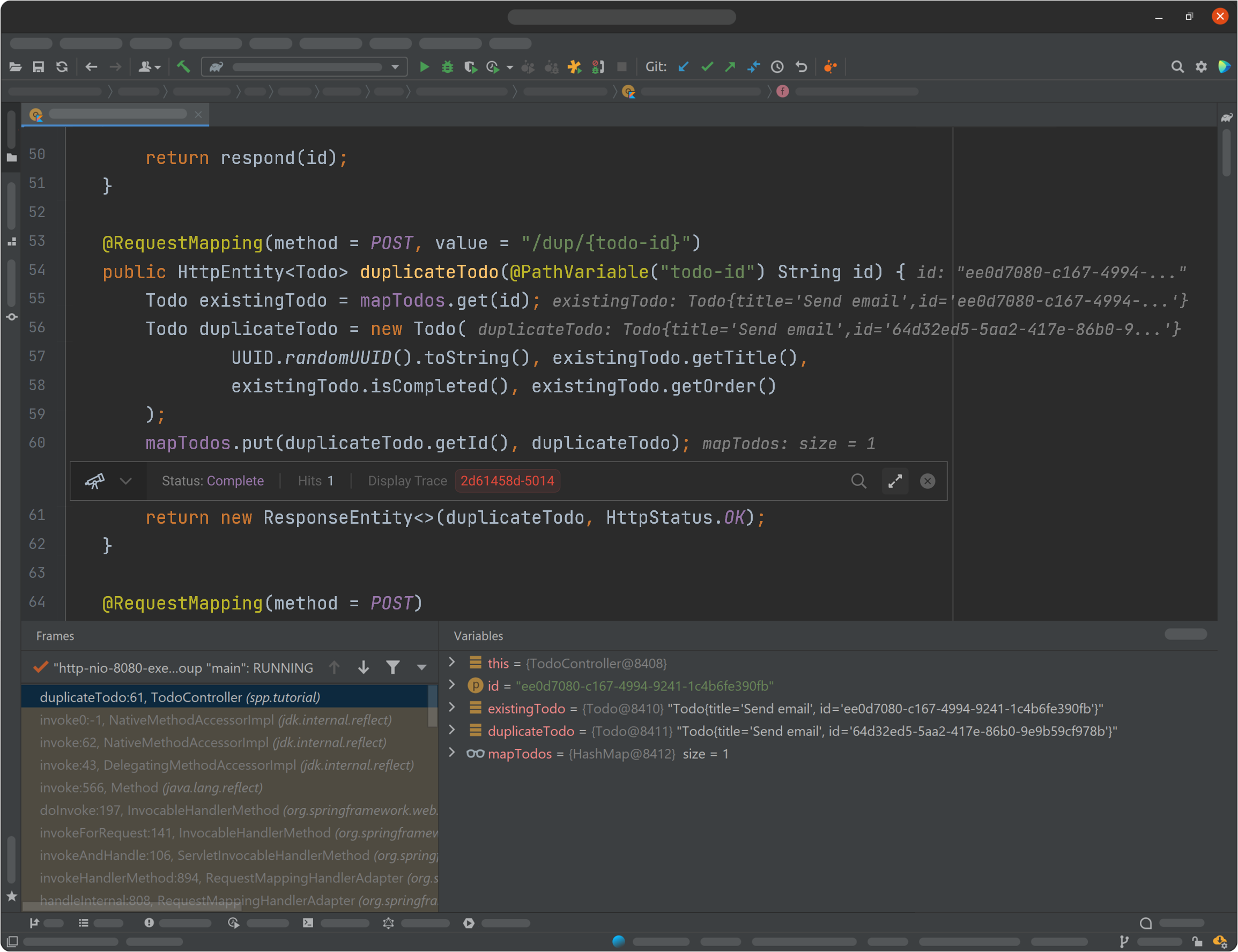 The above should be a sight far more familiar to software developers. Beyond the fact that you can’t step through execution, non-breaking breakpoints look and feel just like regular breakpoints.

Interview: Renowned filmmaker Philip Bloom on the Sony Xperia Pro-I and the state of smartphone videography

Handling huge amounts of data is literally impossible without having some sort of relationship to NoSQL database systems, such as...

Over the past few years, the technology industry has exploded. It seems like there is a new record-breaking IPO every...

Interview: Renowned filmmaker Philip Bloom on the Sony Xperia Pro-I and the state of smartphone videography