Everything announced during the E3 2021 event

Everything announced during the E3 2021 event

During the Xbox & Bethesda Games Showcase, we had announcements and updates galore. Microsoft revealed 30 games, 27 of which are joining Xbox Game Pass. If you missed the event, don’t worry. We’ve rounded up every announcement from the show. Here is everything announced at the Xbox & Bethesda Games Showcase:
Microsoft kicked off the showcase with a new cinematic trailer for Starfield. The trailer doesn’t give too much away but does confirm that the sci-fi RPG will be exclusive to Xbox Series X|S and Windows 10 and launches on November 11th, 2022. The game will also be available with Xbox Game Pass and Xbox Game Pass for PC.
Next up was a new gameplay trailer for S.T.A.L.K.E.R. 2: Heart of Chernobyl, which showcased some of the unsettling and desolate environments you’ll come across in the Exclusion Zone, horrifying creatures, and intense firefights. The game launches in 2022 for Xbox Series X|S, Xbox One, and Windows 10 and is included with Xbox Game Pass.
WB Games confirmed its co-op zombie shooter Back 4 Blood will join Xbox Game Pass when it launches on October 12th. The new trailer showcased Back 4 Blood’s Swarm PvP mode and co-op gameplay.
Contraband, Developed by Avalanche Studios, is a “co-op smuggler’s paradise set in the fictional world of 1970s Bayan.” The cinematic trailer doesn’t give much away, but Contraband has been confirmed for Xbox Series X|S and Windows 10 and is coming to Xbox Game Pass when it launches.
Here’s something we didn’t see coming: a Sea of Thieves and Pirates of the Caribbean crossover. Sea of Thieves: A Pirate’s life, which features none other than Jack Sparrow himself, is a new campaign that’s coming to the swashbuckling multiplayer adventure game later this month.
Microsoft announced that Yakuza: Like a Dragon is now available with Xbox Game Pass.
Next, we had the gameplay reveal for Battlefield 2042, which showcased some of the game’s vehicular combat, intense firefights, a dynamic weather system, an awesome-looking grappling hook, and much, much more. Battlefield 2042 launches on October 22nd.
12 Minutes, starring Willem Dafoe, Daisy Ridley, and James McAvoy, received a new gameplay trailer and release date. The game launches for Xbox Series X|S, Xbox One, and Windows 10 on August 19th and will be included with Xbox Game Pass on day one.
Microsoft and Double Fine showcased some Psychonauts 2 gameplay with a new trailer and also confirmed the game’s release date. Psychonauts 2 launches for Xbox Series X|S, Xbox One, Windows 10 on August 25 and is included with Xbox Game Pass. 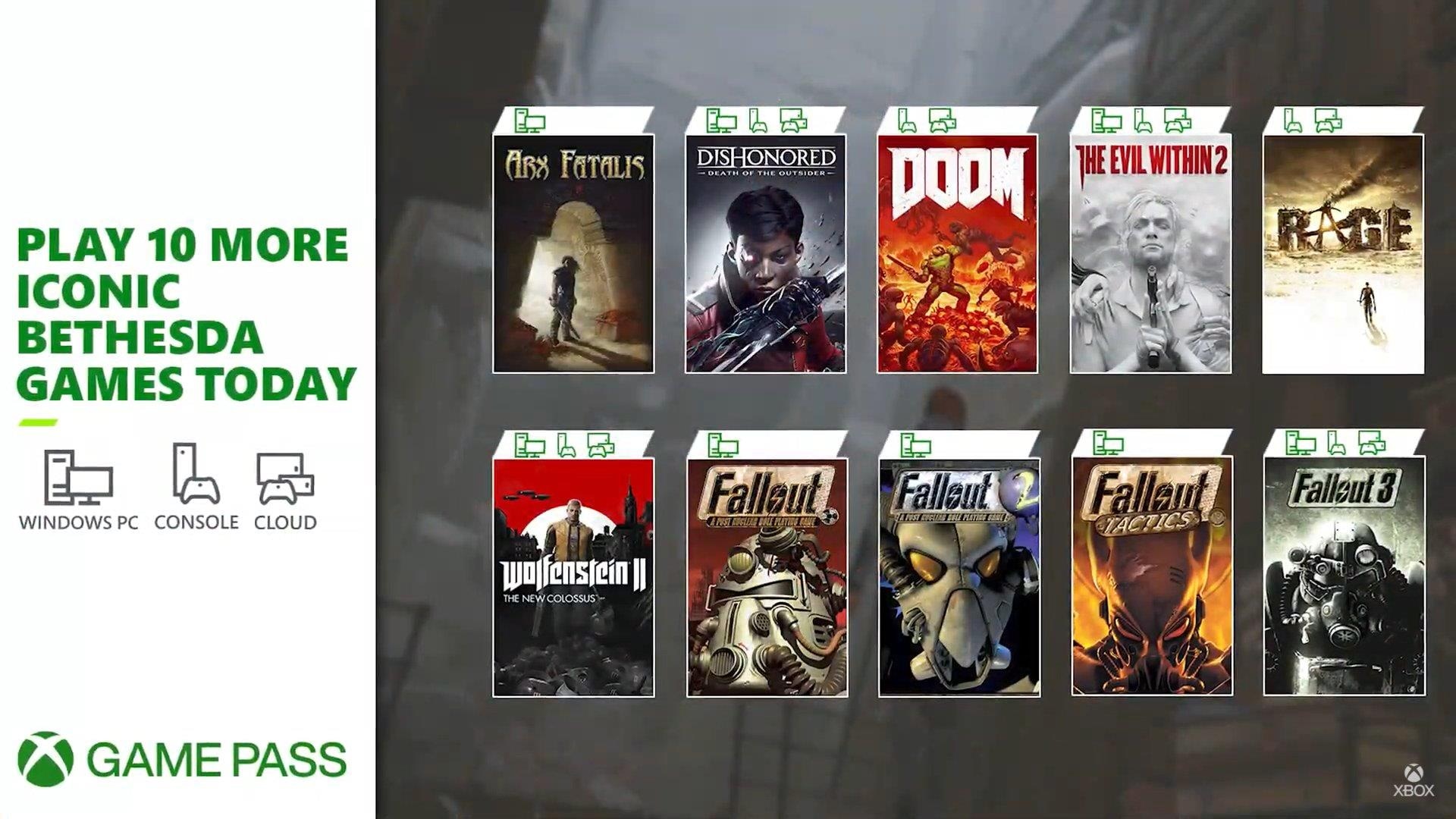 Microsoft announced that Ten Bethesda games, including Fallout 3, Rage, and Doom, were added to the Xbox Game Pass library today. 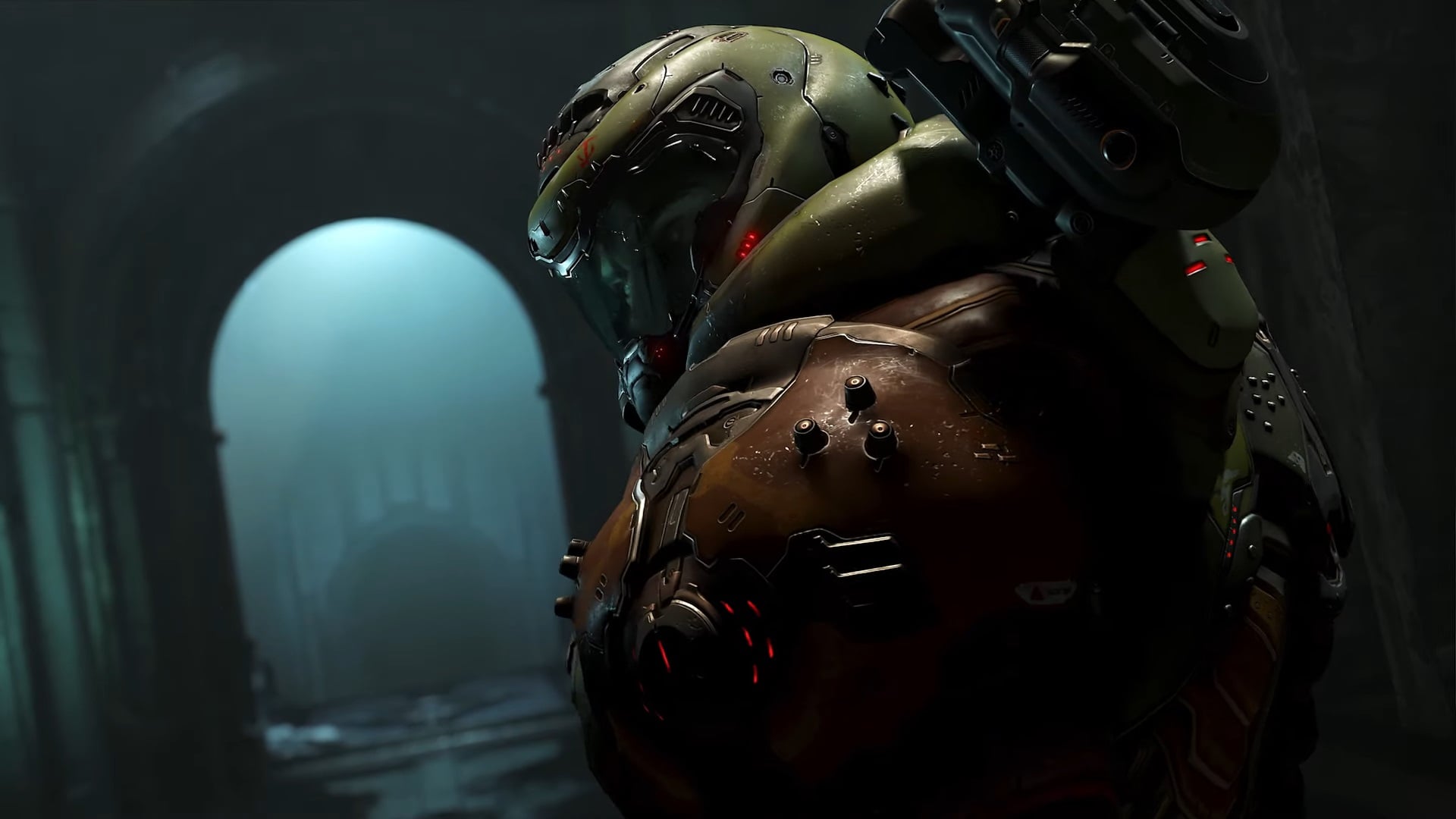 Doom Eternal is getting a free next-gen update that offers improved visuals and performance, and three performance modes. On Xbox Series X you’ll get: Ray Tracing Mode (1800p at 60fps), Balanced Mode (2160p at 60fps), and Performance Mode (1800p at 120fps). On Xbox Series S, you can expect: Balanced Mode (1440p at 60fps) and Performance Mode (1080p at 120fps). The update is also coming to PC and will roll out on all platforms on June 29th.
Bethesda revealed Fallout 76‘s next big update, Fallout 76: Steel Reign. This free expansion concludes the Brotherhood of Steel storyline, launching July 7th.
Bethesda released a launch trailer for The Elder Scrolls Online’s big next-gen upgrade, which launches on June 15th.
Party Animals is a party game similar to Gang Beasts; you’ll choose a character from a diverse cast of animals and battle it out against your pals across multiple game modes. Party Animals launches in 2022 and has been confirmed for Xbox Series X|S and Xbox One, and is coming to Xbox Game Pass.
Hades, one of the best games of 2020, is finally heading to Xbox consoles on August 13th. In the roguelike, you play as Hades’ son Zagreus who is attempting to escape the depths of hell. Hades is also coming to Xbox Game Pass the day it launches.
Sci-fi adventure Somerville sees you attempting to make your family whole again in the wake of a catastrophe and large scale conflict. Somerville launches in 2022 and comes to Xbox Game Pass on day one.
Microsoft and 343 Industries not only confirmed a holiday 2021 release window for Halo Infinite but also revealed some multiplayer gameplay, which showed off a bunch of new weapons, the grappling hook, and, of course, the Capture the Flag game mode.
We were then treated to a new gameplay trailer and release date for Diablo II: Resurrected. The dungeon crawler launches for Xbox Series X|S and Xbox One on September 23rd.

Microsoft played into the meme and closed the Xbox & Bethesda Games Showcase by announcing the Xbox Mini Fridge. That’s right, there’s a mini fridge that looks like an Xbox Series X launching sometime this year, so if you still can’t get an Xbox Series X by then, you might able to play pretend with the mini fridge.

What was your favourite announcement from the showcase? Let us know in the comments below!

Eiyuden Chronicle: Hundred Heroes Is Coming To Xbox in 2023 With A Surprise Second Game In 2022

Minute Of Islands Is Out Now On Switch

Minute Of Islands Is Out Now On Switch