Dead by Daylight just released its original story chapter, Portrait of a Murder, two weeks ago, but it seems Behaviour Interactive is already hard at work on what’s next for the asymmetrical horror game: Ringu.

Ringu was first released in 1998 in Japan by director Hideo Nakata before it was remade as The Ring in the West by director Gore Verbinski, who would direct a trio of Pirates of the Caribbean movies for Disney (weird directorial jump, right?). Already a famous horror icon in Japan, Verbinski’s take further solidified the story of The Ring (and Ringu) as a classic in the genre. Now we’re all scared of videotapes, wells, and scary people emerging out of television screens. Behaviour Interactive will revive those fears with its newest chapter, due out in March of 2022.

“A key piece of horror history is joining Dead By Daylight’s expansive roster,” the announcement reads. “Prepare for Ringu to spread its curse across The Fog, with a new chapter inspired by Koji Suzuki’s novel and the original acclaimed film adaptation. Koji Suzuki’s Ring, originally published in 1991, began the haunting story of a spreading curse and its doomed victims. In 1998, the novel was adapted into a Japanese feature film of the same name (widely known as Ringu to North American audiences) instantly adding a new presence into the pantheon of cinematic horror icons.”

If you’re unfamiliar with the premise of The Ring or Ringu, it centers around a videotape that tells viewers they’ll die in seven days. A vengeful spirit emerges out of a TV, and it’s likely that said vengeful spirit – you know, the girl wearing a white dress with black hair – will be the killer players stalk around a well with in Dead By Daylight next March.

“We are very excited for the collaboration with Behaviour Interactive and the Dead by Daylight team,” Kadokawa producer Reiko Imayasu says in the announcement. “We’ll be sending one of our most haunting characters to the Fog to pour down horrors that will rival all the great predecessors.” 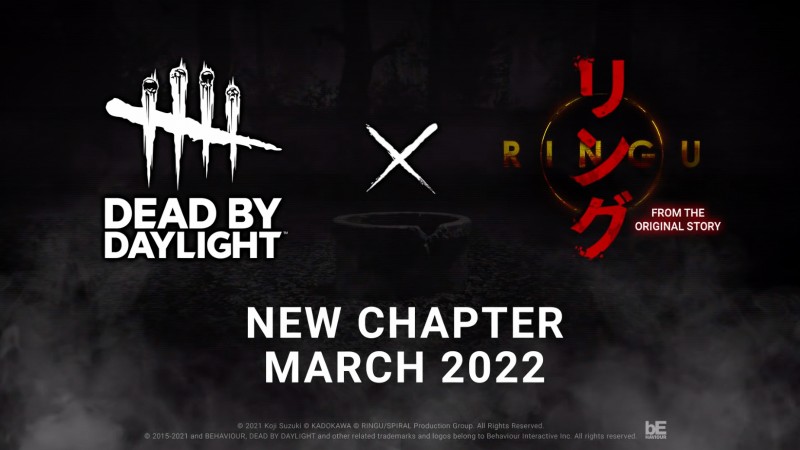 Behaviour Interactive teases that players will need to wait longer than seven days to learn more about this chapter of Dead by Daylight. While waiting, read about the recently-released Portrait of a Murder chapter and then check out its release trailer. Find out why Dead by Daylight is on Game Informer’s list of the top 10 horror games to play right now after that.

Are you excited about this Dead by Daylight x Ringue chapter? Let us know in the comments below!

Blue Isle Studios is bringing its new shooter, Leap, to PlayStation 5 and PlayStation 4 along with a PC release....

Those out there who are looking for a reason to buy and play Ys IX: Monstrum Nox have a few...