A 10% reduction would take 8 years

We’ve played through this season’s Trial, Seasonal Championships, and PR Stunts to give you our recommended car selections and tunes for each event. We’ve also detailed the autumn season’s complete list of challenges, including vehicle restrictions, to make things slightly easier to parse.

By completing every event this month’s Festival Playlist has to offer, you’ll unlock the Min, Meet Max achievement.

Forza Horizon 5’s 11th Series gives us a fresh batch of cars to unlock. In Series 11: Rami’s Racing Story, nabbing 80 points across the Series will net you the exclusive BMW M4 ’21. If you manage to collect 160 points, you’ll bag the exclusive M-B 300 SLR. 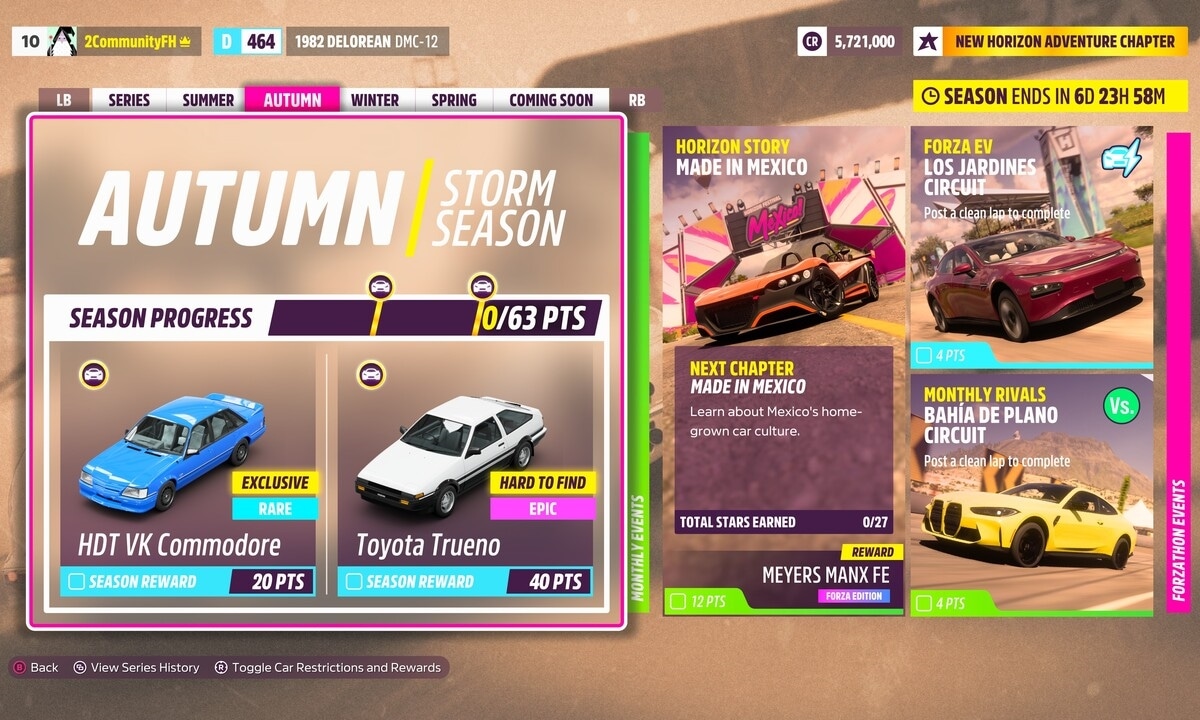 This week’s Festival Playlist season is autumn, and as always, two cars are up for grabs. For accumulating 20 points, you’ll unlock the exclusive HDT VK Commodore and, for 40 points, the hard-to-find Toyota Trueno.

For this week’s Trial, Stock Showdown: Ford RS200 Evolution, we can’t give you any car or tune recommendations as you’re limited to a stock Ford RS200 Evolution. This is a great little car, and it doesn’t really have any negatives other than it being slow off the starting line, though that doesn’t matter here as everyone is in the same car!

For the Runway Danger Sign PR Stunt, you’re going to need to clear a 225m target using any Class B car that was manufactured between 1970 and 1989. To keep things simple and cheap, we went for the 1989 Porsche 944 Turbo, which cost us 35,000 CR from the Autoshow, and kept it stock. There isn’t too much to say about this Danger Sign — just start from the end of the runway, and you’ll easily beat the target.

The Mudflows Speed Trap asks you to blast through the Speed Trap at 122mph or more in a Class B car made between 1970 and 1989. Much like the Runway Danger Sign, we kept things nice and simple and used a stock 1984 Opel Manta 400 (100,000 CR from the Autoshow), which had more than enough speed to get us across the line and beat the Trap. To make things easier on yourself, you’ll want to start your approach from the Event Horizon Danger Sign marker.

The Final PR Stunt this week is the Green Hills Speed Zone, which requires you to beat an average speed through the zone of 122mph in any Class B car made between 1970 and 1989. We stuck with the stock 1984 Opel Manta 400, which we used for the Mudflows Speed Trap. To build up enough speed, we started from close to the Cascadas Trailblazer marker and floored it from there. As long as you don’t drop your speed too much through the first couple of bends, you should do well with the Opel here.

Our first Seasonal Championship is Long Time No See, where we’re restricted to a Class B 1970s Classic Rally car. You’re pretty limited with what you can pick here. We opted for the 1970 Ford GT70 and won all three events with it in a stock setup. The only downside about the GT70 is its poor acceleration — if you crash into a sidewall, you’re going to lose a few places getting back up to speed. To combat this, and to the Championship slightly easier with the GT70, you can always beef it up with tune: 114 720 037.

For the next Seasonal Championship, Drag Racing Masters, you can only use a Class C Classic Muscle Car. This Championship is nice and easy because it’s just three simple drag races. To win this one, we used a stock 1971 Plymouth Cuda 426 Hemi. The Plymouth is sluggish off the line, so you will fall behind slightly at the start, but as long as you keep driving straight, you’ll eventually pass the CPU cars and finish in first place each time.

In the final Seasonal Championship, Totally Tubular, you are restricted to a 1970s Class D Pick-Up & 4×4. We opted for the 1975 Ford Bronco with the tune: 123 915 771. We won all three races with the Bronco, and this setup pretty easily. The only thing you will need to watch out for is the Bronco’s handling and braking, both of which are quite poor. However, the Bronco’s acceleration and overall speed for a Class D vehicle are somewhat decent, so you should be back out in front in no time if you do end up taking a corner too wide.

To complete Forza Horizon 5’s new Hot Wheels events on the Festival Playlist, you will need to have reached Elite Rank (S2 Class) in the Hot Wheels Academy.

For the Speed Trap: Horizon Nexus, you need to pass through the Trap at a minimum speed of 160mph in any class B vehicle so long as it was made sometime between 1970 and 1980. We went for the old faithful 1984 Opel Manta 400, which we kept stock. Start your approach from the fork at Forst Falls and blast down the straight towards the Trap, making use of the fans to propel you forward and up to 200mph. As long as you don’t hit the sidewall, which you shouldn’t do as you don’t need to turn, this Speed Trap is a breeze.

This week’s Hot Wheels Seasonal Championship: Ice, Ice, Maybe requires you to win the Championship in a Class A 1980s Retro Supercar. Now, there are only a few cars that fit the bill here, and some of them are extremely expensive. To save all the faffing around with tunes and to keep things cheap, we went with the 1988 Lamborghini Countach LP5000 QV, which got us three wins on the bounce. This is a great, speedy car that really grips into the corners — just be careful on the ice, though!

Got any recommended cars or tunes for completing this season’s challenges that differ from ours? Give the community and us your suggestions down in the comments below, and let us know if you found our round-up useful!

I Was A Teenage Exocolonist Review (Switch eShop)

Microsoft could be gearing up to launch another controller design ready for the holiday season, after an account on Twitter...

I Was A Teenage Exocolonist Review (Switch eShop)