Apple Music Is Now On PlayStation 5 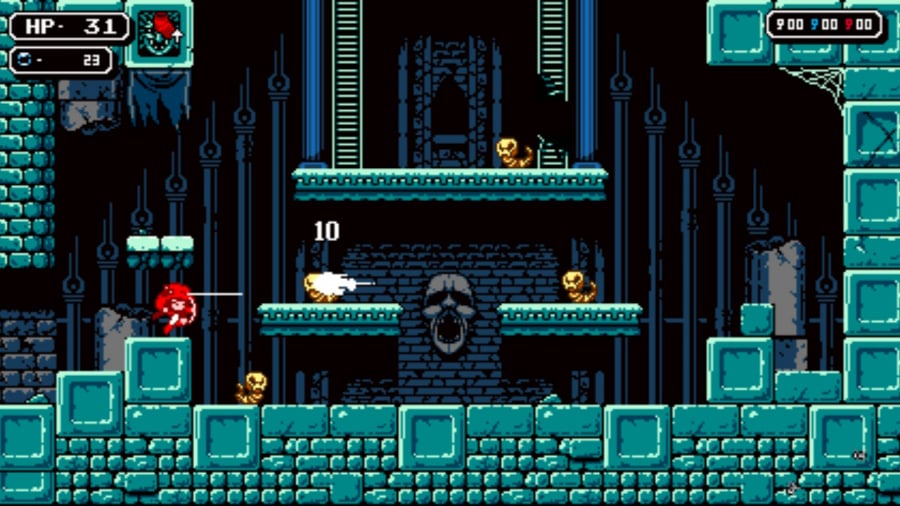 Astalon: Tears of the Earth is yet another retro-inspired action platformer on Switch eShop, with a sprinkling of light RPG elements. It tells the tale of an unspecified planet that falls into chaos after an endless battle between its many kingdoms. After decades of surviving in the wasteland, a band of three heroes journey into the Tower of Serpents in the hope of saving their village. It’s a fairly bog-standard plot, but one that ultimately feels quite lean, with little fat to distract from the strong gameplay on offer here.

You play as all three heroes, interchangeable at various campfires set up within the tower: there’s Arias, the keen fighter who prefers close quarter combat; Algus, a stoic wizard who can shoot powerful orbs towards enemies; and Kyuli, a sultry rogue with a slow, but accurate long-ranged bow. Each character has their own stats which can be upgraded via the mighty Epimetheus, a fearsome beast who grants our heroes new abilities in exchange for the soul of Algus.

The gameplay feels very much like your average Metroidvania, with multiple pathways to explore, locked doorways, and a smattering of collectibles to gather on your way. Certain pathways require a specific character in order to progress; for example, Kyuli can jump higher than Arias and Algus, which may be required for accessing high ground. Similarly, Arias can cut down blockages, and Algus can activate magical switches. It’s great that the game encourages you to play as all three characters, but it’s mighty frustrating when you have to backtrack to the nearest campfire in order to pick the right character.

The enemies littered throughout the tower are varied and continually interesting; some float around the area, some can fire projectiles, and others simply charge at you with reckless abandon. Mini boss encounters happen rarely, and when they show up, they always prove to be a nice change of pace, albeit not particularly very challenging. The main bosses are excellent, however, providing tough experiences without ever feeling overbearing.

The game offers up multiple graphical filters depending on your preference (although annoyingly, you can only access this via the main menu). By default, the pixel-heavy visuals appear softened, giving off a more retro feel, but you can swap this out for a ‘proper’ CRT filter, a black and white filter, or none at all. We’ve rarely seen a game with this many graphical options, which is genuinely great to see. The game otherwise looks pretty good throughout; the sprites and environments are fairly basic, but there animation and effects are strong throughout, and there’s a nice use of colour.

With a great variety of environments, simple gameplay, and a strong line-up of enemies, Astalon: Tears of the Earth turns out to be one of the more successful action platformers we’ve seen in recent months. It will likely only last a handful of hours, but there’s a lot here to love, and it’s a relative no-brainer if you’re a fan of high fantasy Metroidvanias.

Apple @ Work: WWDC 2021 wishlist for Apple device management in the enterprise and K-12

Image: Nintendo Life / Zion GrasslAnyone who's ever spent a decent amount of time with video games probably has...

Apple @ Work: WWDC 2021 wishlist for Apple device management in the enterprise and K-12