Securing cloud-native applications requires proper understanding of the interfaces (boundaries) being exposed by your microservices to various consumers. Proper tools and mechanisms need to be applied on each boundary to achieve the right level of security. Properly securing the infrastructure on which your application runs is also very important. This includes securing container images, securely running container runtimes, and properly configuring and using the container orchestration system (Kubernetes).

In a pre-microservices era, most applications followed the MVC architecture. Today, we call these monolithic applications. Compared to such applications, a cloud-native application is highly distributed, as shown in Figure 1. 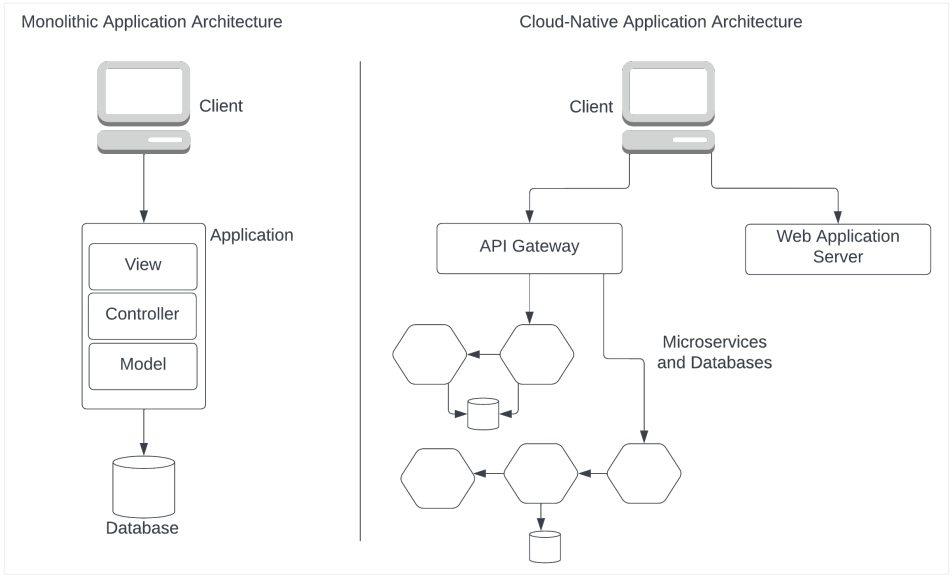 A monolithic application typically has one entry point. Beyond that, everything happens within a single process, except for database calls or similar interactions. Comparatively, the surface of exposure in a cloud-native application is much higher. As shown in Figure 1, a cloud-native application typically has multiple components (services) that communicate over the network. Each entry point into any given component needs to be appropriately secured.

Let’s elaborate further on application boundaries and understand the actual boundaries that we need to worry about.

Microservices within a business domain would be able to communicate with each other securely with no boundaries. This is illustrated in Figure 2 as “Intra-domain east-west traffic.” Secure communication within this domain can be implemented using mutual TLS. Mutual TLS can be implemented using a service mesh. A more lightweight approach could be to pass around an authorization token issued by one of the gateways. We will discuss this approach later in the article. 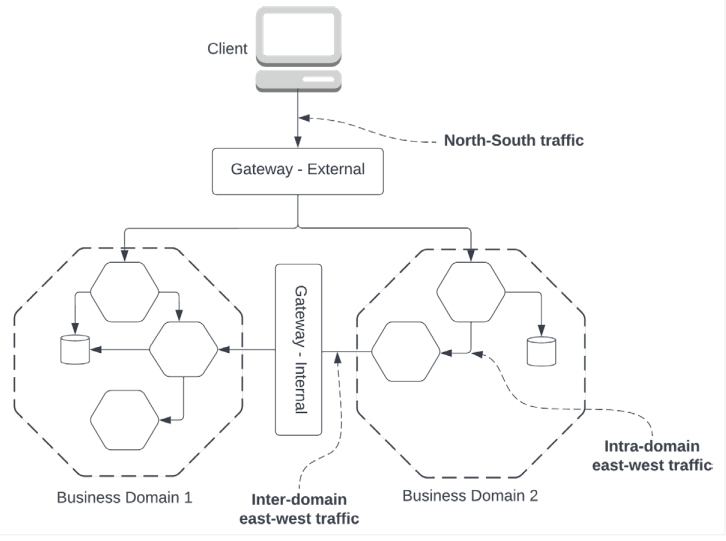 Microservices across business domains should not be able to communicate with each other freely unless they are exposed as APIs and explicitly allowed to communicate.

This is illustrated as “Inter-domain east-west traffic” in Figure 2. This concept of business domain boundaries is further explained in the paper “Cell-Based Architecture.”

There is a clear boundary that separates all microservices from the client applications (web/ mobile apps). This is illustrated as “North-South traffic” in Figure 2.

Next, let’s identify what we define as APIs and microservices. Any microservice (or collection) that needs to be exposed out of a given boundary needs to be defined as an API. An API typically has a specification such as OpenAPI, GraphQL, AsyncAPI, and so on. An API gateway is used to expose APIs across boundaries. An API gateway’s main tasks are as follows:

As shown in Figure 2, an API gateway protects the cloud-native application at the north-south channel as well as the interdomain east-west channel.

The Role of OAuth2.0 in Securing Cloud-Native Applications

A client calling an API needs to obtain an OAuth2.0 access token from a token service before it can talk to the API. The API gateway validates the token and ensures it is issued by a trusted authority before it allows access to the target. This is shown in Figure 3. Although gaining access to APIs is common, types of tokens and how you get them differ based on the use case these tokens are used for. 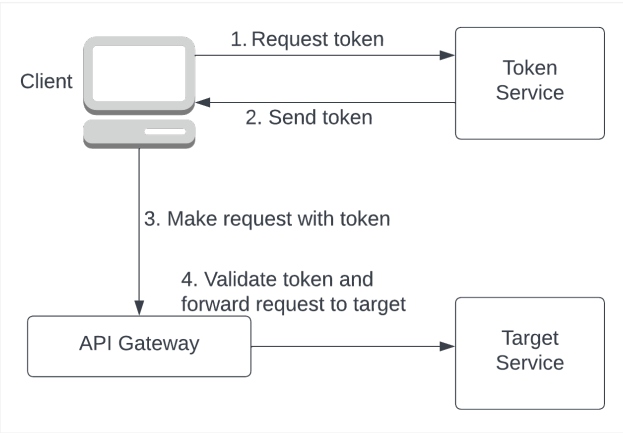 Figure 3: Workflow for obtaining and using an OAuth2.0 access token

The OAuth2.0 specification has a concept called Grant Types that define the steps for getting access tokens. Advanced API Security, by Prabath Siriwardena, is a good book for understanding OAuth2.0 concepts and its use cases.

Possession of a valid access token is the primary requirement for a client to access an API. One of the key benefits of access tokens is that it not only allows you to call an API, but it can also specify the type of action you can perform with it.

The standard way to model this on an API is to say the product list update operation requires a special “scope.” Unless the token being used to access this API bears this scope, the request will not be permitted. The OpenAPI specification allows binding scopes to an operation.

Once the client knows that it requires a special scope to access an operation, it requests the token service to issue a token bearing the required scope. When verifying that the requesting user/client is authorized to obtain the requested scope(s), the token service binds the relevant scopes to the token. This workflow is shown in Figure 4.

We can see that authentication and authorization are terminated at the API gateway. But there can be cases where the actual microservices need to know details of the user/client accessing the service for performing business logic. This requirement is done by the API gateway issuing a secondary JWT formatted token (not an access token) and forwarding it to the target service. This secondary token can be passed around the microservices within that domain and used for building mutual trust within that domain.

Beyond permissions, we may need to implement other authorization rules in cloud-native applications. Consider restricting access to a certain application functionality available between 8 a.m. to 6 p.m. on weekdays. While these can be implemented in the source code of the microservice, that is not a good practice.

These are organizational policies that can change. The best practice is to externalize such policies from code.

Open Policy Agent (OPA) is a lightweight general-purpose policy engine that has no dependency on the microservice. Authorization rules can be implemented in Rego and mounted to OPA.

Figure 5 illustrates the patterns in which OPA can be used for authorization rules. 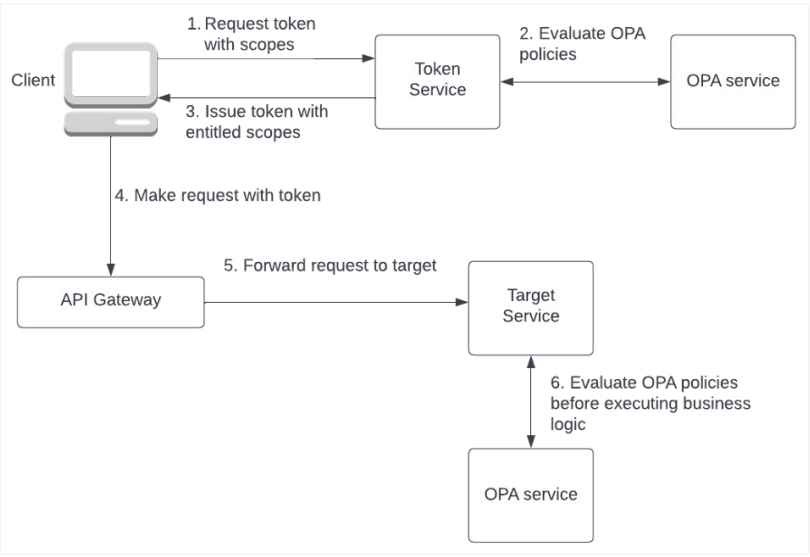 Docker is the most popular tool for packaging and distributing microservices. A Docker container encapsulates a microservice and its dependencies and is stored in a container registry (private or public).

To prevent this from happening, we need to externalize application secrets from code. Let’s take a look at a sample Dockerfile in a Java program that does this:

The third line in this Dockerfile instructs Docker to create an environment variable named CONFIG_FILE and point it to the /opt/configs/service.properties location. Instead of having secrets hard coded in source code or the code read from a fixed file location, the microservice’s code should be written so that it looks up the value of this environment variable to determine the configuration file location and load its contents to memory. With this, we have successfully avoided secrets within the code. If we build a Docker container with this file, it will not contain any sensitive information. Next, let’s look at how we can externalize the values we need.

Before running a Docker image built from the above Dockerfile, we need to mount it to a location that has the actual configuration file with the proper values. This can be done with the following Docker run command:

Developers need to set an environment variable named DOCKER_CONTENT_TRUST and set its value to 1 to enforce DCT in all the environments on which Docker is used. For example: :> export DOCKER_CONTENT_TRUST=1. Once this environment variable is set, it affects the following Docker commands: push, build, create, pull, and run. This means that if you try to issue a docker run command on an unverified image, your command will fail.

Any operating system has a super user known as root. All Docker containers by default run as the root user. This is not necessarily bad, thanks to the namespace partitions on the Linux Kernel. However, if you are using file mounts in your containers, an attacker gaining access to the container runtime can be very harmful. Another problem running containers with root access is that it grants an attacker access to the container runtime to install additional tools into the container. These tools can harm the application in various ways such as scanning for open ports and so on.

Docker provides a way to run containers as non-privileged users. The root user ID in Linux is 0. Docker allows us to run Docker containers by passing in a user ID and group ID. The following command would start the Docker container under user ID 900 and group ID 300. Since this is a non-root user, the actions it can perform on the container are limited.

Securing a cloud-native application properly is not trivial. API gateways and mutual trust are key to ensuring our communication channels are kept safe and we have a zero-trust architecture. OAuth2.0, scopes, and OPA (or similar) are fundamental to ensuring APIs are properly authenticated and authorized.

Going beyond this scope, we also need to be concerned about using proper security best practices on Kubernetes, properly handling secrets (passwords), securing event-driven APIs, and more. APIs, microservices, and containers are fundamental to cloud-native applications. Every developer needs to keep themselves up to date with the latest security advancements and best practices.