In this article, we discuss the two architectural styles (Lambda and Kappa) for data processing at the edge and describe an example of real-life implementation of Kappa Architecture in a retail banking customer experience scenario.

Both the Lambda and Kappa architecture styles were developed to support big data analytics in processing and handling a large volume of data at a high velocity.

Lambda architecture, originally created by Nathan Marz, addresses the challenges of the simultaneous data processing requirements in batch and real-time modes by segregating the flow of data into two distinct paths within the pattern:

The batch layer inserts data into a serving layer which stores data in an indexed batch view for efficient querying. The speed layer updates the serving layer with the most recent data. Both of these paths converge at the analytics client applications where the client can choose to view the data either from the cold path or hot path. While there are significant advantages of Lambda architecture in terms of retaining the input data unchanged and the ability to reprocess data whenever required, it should be recognized that in Lambda architecture data processing logic, transformation logic, etc., are duplicated at two places and get implemented using two different technologies/frameworks — for example, Hadoop for batch processing and Storm for speed processing of data. This makes the implementation of this architecture become operationally complex.

Kappa architecture, originally created by Jay Kreps, proposed a single data processing path using a stream processing system that ingests events of data streams from data sources into a Kafka-like distributed fault-tolerant log. An event log is immutable and ordered. Any new event is appended to change the current state of the event. As the data is persisted in the Kafka-like streaming system, reprocessing of data is possible by initiating a second instance of a data stream processing job to process the same input data and store it in a different table, if required for client application consumption.

The use case is as follows: Bringing selective SoR data from the mainframe to the edge so the data can be consumed by digital channels and partner systems. In this use case, the core banking system is running on several mainframes. The idea is to apply domain-driven design principles to segment data products (along with relevant services for consuming data) and into domains like accounts, payments, agreements, and so forth. We leveraged the Kappa architecture for this use case to build a real-time data cache ahead of the system of records (SoR) to reduce “read” transaction pressure on the core banking system and ensure the customer gets consistent performance on the digital platform.

This architecture enables the agility to capture changes to the customer, account, agreements, and payment data in the core banking SoR and deliver changed data in a consistent and near real-time way, leveraging CDC (change data capture) technology to the digital access layer. This architecture is implemented in a hybrid cloud environment to meet the following requirements, where core banking SoR resides on-premises and the digital platform is hosted in a public cloud:

The following diagram is an architectural overview of the solution using the Kappa pattern. 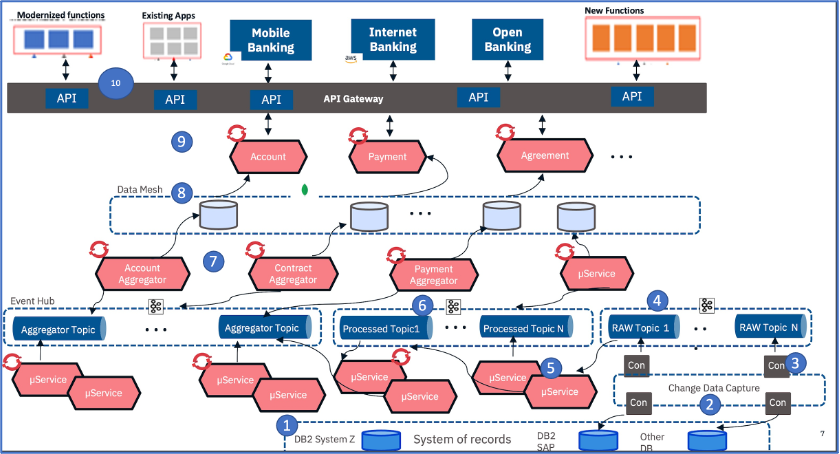 The following is the description of the architecture components enumerated in the above diagram:

Systems and components described above in four to 10 are all hosted on AWS public cloud. Several such data pipelines process business events generated from the system of records within the context of an individual domain (such as customer, account, and payment) and delivering it to the system of engagement through multiple “data ports” is essentially an approach of moving towards decentralized “data mesh” architecture from a centralized event backbone, of which Kappa architecture is the underlying foundation.

This hybrid cloud implementation of Kappa architecture significantly reduces the load on the enterprise middleware and core system database. Data events exposed as APIs also provide the capability to a bank, their partners, and other ecosystem providers in developing additional features and innovative applications.

The following are the architects who were involved in defining the initial architecture model that eventually evolved to this detailed implemented Kappa architecture.

Introduction Nestjs is a cutting-edge Node.js framework for developing server-side applications that are efficient, dependable, and scalable. It is simple...

Introduction I'm lucky enough to currently work on a large microservices-based project as a solution architect. I'm responsible for designing...