4 Pitfalls When Adopting a Hybrid Cloud 4 Pitfalls When Adopting a Hybrid Cloud


Companies making a beeline for cloud services is old news. The Flexera State of the Cloud Report 2021 revealed that the average company’s IT infrastructure setup already runs five different cloud mechanisms on which their data transfer, computing, and networking take place.

This means companies are already exposed to a combination of on-premises servers, public and private clouds. Cloud industry leaders, on being asked how they pulled off their move to the hybrid cloud in a survey by 451 Research, shared some interesting information:

No matter what applications and workloads they ran, nearly all these companies faced challenges in deploying a hybrid cloud environment. Let’s take a look at what issues to expect and how to overcome them while transitioning to the hybrid cloud.

1. Not Starting With a Goal (Or End) In Mind

Don’t lose track of why your company moved to the hybrid cloud in the first place. “A lot of organizations look at hybrid cloud and say, ‘Okay, this is what everyone’s doing, so this is what I’m going to do,’” says Lauren Nelson of Forrester Research.

Instead of going with popular opinion, you need to look inward and evaluate the current state of your IT infrastructure.

To truly make a success out of cloud migration, you need to understand the reasons why the clouds – whether public or private – are being adopted. A TechRepublic survey found that avoiding hardware costs while expanding data center capabilities is the primary reason companies adopt a hybrid cloud model. 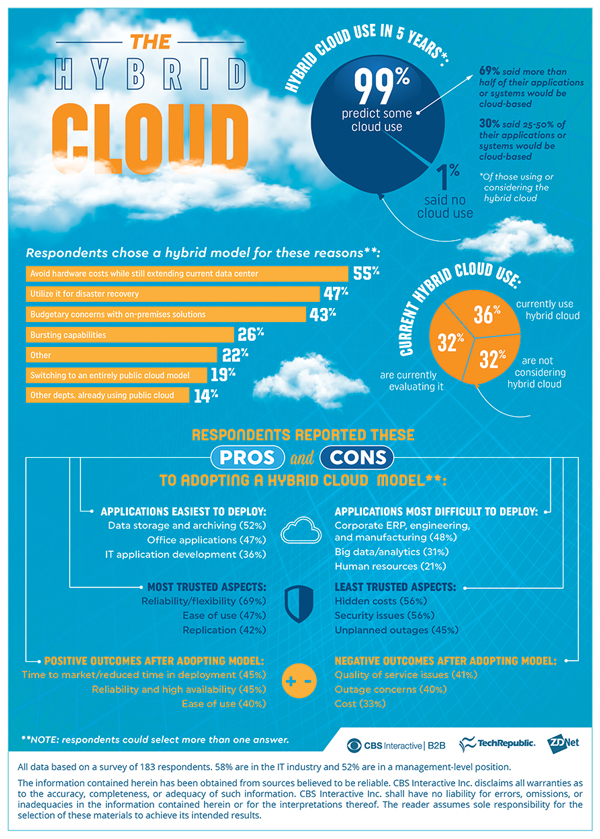 
Similarly, a clear list of objectives and milestones for the transition will keep teams on track and motivated throughout the process.

2. Biting off More Than You Can Chew

Sometimes the smartest people forget to do the simplest things. For example, taking one step at a time and sticking to the previously agreed upon priorities. Or, they do things like overpromising and then under-deliver.

Smart IT teams make it a point to do a cost/benefit analysis of whatever infrastructure upgrade they’re planning to do. Needless to say, a hybrid cloud deployment saves costs in quite a few ways. Planning workloads ahead of time and deciding what applications and databases move to the cloud first is key to managing the madness step-by-step.

For example, a cautious and time-tested approach is to start the migration with non-critical applications and data to the cloud and then to be followed by the rest later. This solution offers admins and users time and flexibility to learn the new cloud’s architecture, its capabilities, and limitations without putting mission-critical data at risk.

3. Not Obsessing Over Security

The public cloud is perceived to be less secure than on-premises servers or even the private cloud, which can be custom-designed to comply with all the regulatory requirements that a company has to follow.

For a successful hybrid cloud migration, an organization needs to first understand the levels of security that the cloud system under consideration offers. This includes scans, malware reports and notifications, data encryption, and cloud security requirements updates.

A good way to make sure you’re not caught unaware is by getting third-party reports that offer unbiased information about the security setup as well as data and privacy compliance. A comparison of current security mandates versus what’s on offer gives a clear picture of where the blanks are and prepares companies in helping fill them efficiently.

This also helps settle internal dissent over which cloud service provider to go with, should the provider be a public cloud service or an internal private cloud setup. With unbiased data to make the decision, the eternal tossup between high performance, uninterrupted availability, and fool-proof security becomes a question of facts over opinion.

One of the greatest advantages that on-premises servers and IT systems have going for them is the absolute control and total visibility into the entire network, all databases, and access to applications that live on the system. When a company moves its compute, storage, and networking capabilities into the cloud, it relinquishes a considerable degree of control in exchange for other benefits.

Prevent this from happening by checking upfront what types of monitoring and control systems the new cloud platforms offer. Too many IT departments are gullible enough to hope that the hybrid infrastructure they’ve just implemented would “obviously” allow admins (like them) to monitor and control their data and systems on the cloud. Far too often, they only realize their lack of control when it’s too late to do much about it.

This issue should be a make-or-break criterion in deciding which cloud service to pick. If the choice has already been made, invest time and efforts in finding tools that put the IT team back in the driver’s seat with more visibility and control than simply getting passive updates from an inaccessible cloud system.

Things to look for in a cloud monitoring and management platform include:

Cost savings are often the biggest motivator to move to the hybrid cloud for many companies. For others, it is rapid capacity growth while some want the flexibility to scale up and down based on the seasonality of their industry niche.

Whatever their motivation, the only way you can avoid becoming another statistic in the roster of botched cloud migrations is by being systematic and transparent at each step of the process. Paying a little attention to the possible hurdles discussed here will give you a great start. Good luck!